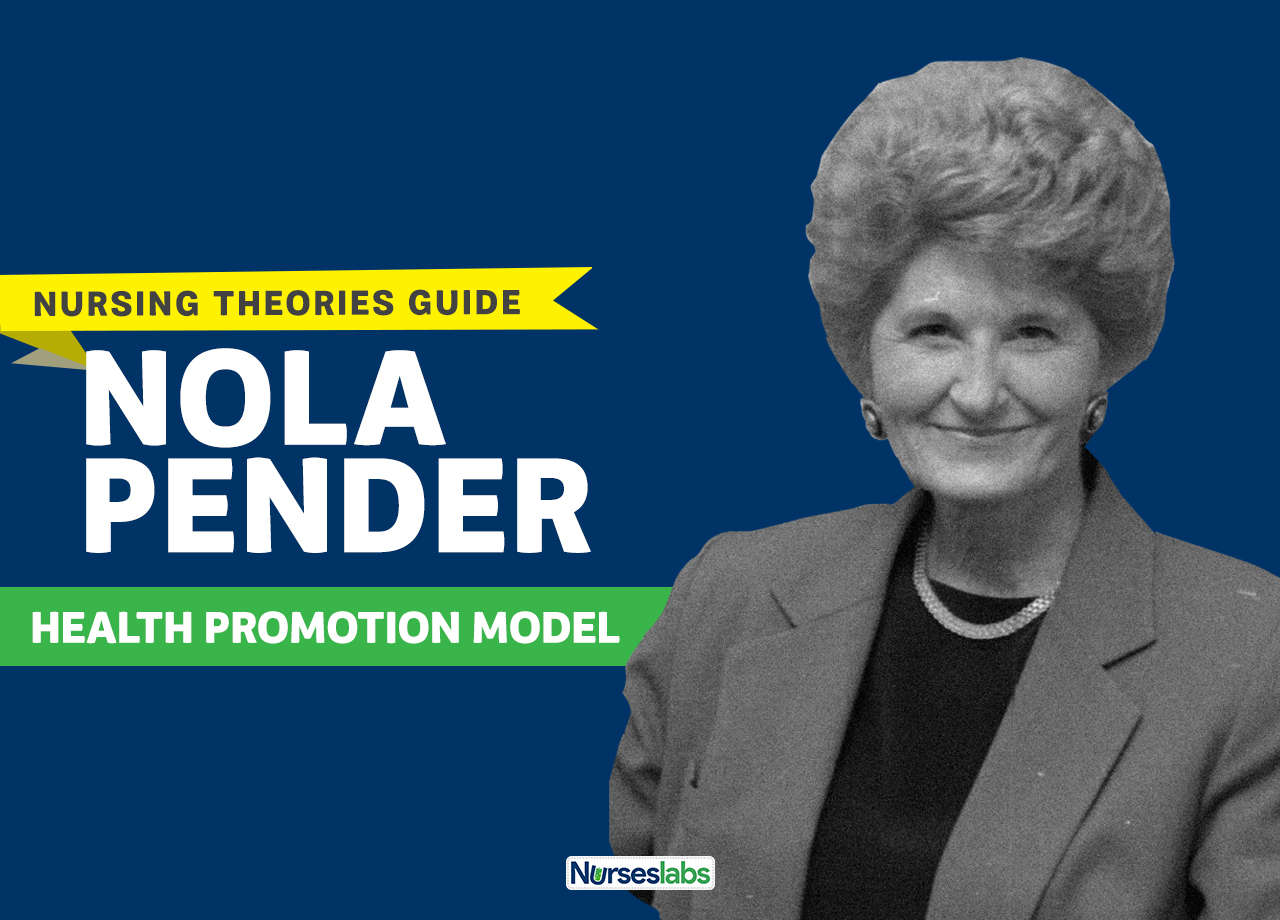 Nola Pender was born on August 16, 1941, in Lansing, Michigan to parents who advocated education for women. Her first encounter with the nursing profession was when she was 7 years old and witnessed the care given to her hospitalized aunt by nurses. This situation led her to the desire to care for other people and her goal was to help people care for themselves.

With the support of her parents, Nola Pender entered the School of Nursing at West Suburban Hospital in Oak Park, Illinois, and receive her nursing diploma in 1962. In 1965, she received her master’s degree in human growth and development from the same university. She moved to Northwestern University in Evanston, Illinois, to obtain a Ph.D. in psychology and education in 1969. Pender’s dissertation research investigated developmental changes in the encoding process of short-term memory in children. Years later, she finished masters-level work in community health nursing at Rush University.

In 1962, Nola Pender began working on a medical-surgical unit and subsequently in a pediatric unit in a Michigan hospital. For 40 years at Michigan State University, she trained students at undergraduate and graduate levels and mentored many postdoctoral candidates.

Pender directed many studies of her Health Promotion Model with adolescents and adults which made her more active in nursing research. Pender and her research unit developed the program Girls on the Move, that studies and measures the results of intervention as it applies to use the model to encourage young people to perform active lifestyles.

Pender was and still is very supportive of nursing organizations where she devoted her time, service and knowledge. She was the president of the Midwest Nursing Research Society from 1985 to 1987.

In addition, Pender was an Associate Dean for Research at the University of Michigan School of Nursing from 1990 to 2001. And as a co-founder of the Midwest Nursing Research Society, she has served as a trustee of its foundation since 2009.

Pender is presently a Professor Emeritus at Michigan State University. Following her retirement as an active professor, she devotes her time as an adviser for health research both nationally and internationally and shares her knowledge and experiences to further improve the nursing profession. She also serves as Distinguished Professor of Nursing at Loyola University School of Nursing in Chicago, Illinois.

As regards to health promotion, Nola Pender has written and issued various articles on exercise, behavior change, and relaxation training. She also has served on editorial boards and as an editor for journals and books.

Pender is also known as a scholar, presenter, and consultant in health promotion. She has worked in collaboration with nurse scientists in Japan, Korea, Mexico, Thailand, the Dominican Republic, Jamaica, England, New Zealand, And Chile.

By contributing leadership as a consultant to research centers and giving scholar consultations, Pender resumes influencing the field of nursing. She also collaborates with the editor of the American Journal of Health Promotion, promoting legislation to support health promotion research.

Awards and Honors of Nola Pender

Pender has been the recipient of numerous recognition and awards that include the 1972 Distinguished Alumni Award from Michigan State University School of Nursing. In 1988, she received the Midwest Nursing Research Society’s Distinguished Contributions to Research Award. She also obtained an Honorary Doctorate of Science degree from Widener University, Chester, Pennsylvania, in 1992.

In 1997, the American Psychological Association awarded her the Distinguished Contributions to Nursing and Psychology Award. She was awarded the Mae Edna Doyle Teacher of the Year Award from the University of Michigan School of Nursing the following year. In 2005, she received the Lifetime Achievement Award from the Midwest Nursing Research Society.

Pender was designated a Living Legend of the American Academy of Nursing in 2012. The award has only been awarded to nurses who have made outstanding contributions to the profession. Pender was the president of the academy from 1991 to 1993.

Have you ever noticed advertisements in malls, grocery stores, or schools that advocate healthy-eating or regular exercise? Have you gone to your local centers or hospitals promoting physical activities and smoking cessation programs such as “quit” activities and “brief interventions?” These are all examples of health promotion. The Health Promotion Model, developed by nursing theorist Nola Pender, has provided healthcare a new path. According to Nola J. Pender, Health Promotion and Disease Prevention should be the principal focus in health care, and when health promotion and prevention fail to anticipate predicaments and problems, then care in illness becomes the subsequent priority.

What is Health Promotion Model?

The Health Promotion Model notes that each person has unique personal characteristics and experiences that affect subsequent actions. The set of variables for behavioral specific knowledge and affect have important motivational significance. These variables can be modified through nursing actions. Health promoting behavior is the desired behavioral outcome and is the endpoint in the Health Promotion Model. Health promoting behaviors should result in improved health, enhanced functional ability and better quality of life at all stages of development. The final behavioral demand is also influenced by the immediate competing demand and preferences, which can derail intended health-promoting actions.

Nola Pender’s Health Promotion Model theory was originally published in 1982 and later improved in 1996 and 2002. It has been used for nursing research, education, and practice. Applying this nursing theory and the body of knowledge that has been collected through observation and research, nurses are in the top profession to enable people to improve their well-being with self-care and positive health behaviors.

The Health Promotion Model was designed to be a “complementary counterpart to models of health protection.” It develops to incorporate behaviors for improving health and applies across the life span. Its purpose is to assist nurses in knowing and understanding the major determinants of health behaviors as a foundation for behavioral counseling to promote well-being and healthy lifestyles.

Pender’s health promotion model defines health as “a positive dynamic state not merely the absence of disease.” Health promotion is directed at increasing a client’s level of well-being. It describes the multi-dimensional nature of persons as they interact within the environment to pursue health.

The model focuses on the following three areas: individual characteristics and experiences, behavior-specific cognitions and affect, and behavioral outcomes.

Health promotion is defined as behavior motivated by the desire to increase well-being and actualize human health potential. It is an approach to wellness.

On the other hand, health protection or illness prevention is described as behavior motivated desire to actively avoid illness, detect it early, or maintain functioning within the constraints of illness.

Individual characteristics and experiences (prior related behavior and personal factors).

Behavioral outcomes (commitment to a plan of action, immediate competing demands and preferences, and health-promoting behavior).

Subconcepts of the Health Promotion Model

Personal factors categorized as biological, psychological and socio-cultural. These factors are predictive of a given behavior and shaped by the nature of the target behavior being considered.

Anticipated positive outcomes that will occur from health behavior.

Anticipated, imagined or real blocks and personal costs of understanding a given behavior.

Judgment of personal capability to organize and execute a health-promoting behavior. Perceived self-efficacy influences perceived barriers to action so higher efficacy results in lowered perceptions of barriers to the performance of the behavior.

Subjective positive or negative feeling that occurs before, during and following behavior based on the stimulus properties of the behavior itself.

Activity-related affect influences perceived self-efficacy, which means the more positive the subjective feeling, the greater the feeling of efficacy. In turn, increased feelings of efficacy can generate a further positive affect.

Cognition concerning behaviors, beliefs, or attitudes of the others. Interpersonal influences include norms (expectations of significant others), social support (instrumental and emotional encouragement) and modeling (vicarious learning through observing others engaged in a particular behavior). Primary sources of interpersonal influences are families, peers, and healthcare providers.

Personal perceptions and cognitions of any given situation or context that can facilitate or impede behavior. Include perceptions of options available, demand characteristics and aesthetic features of the environment in which given health promoting is proposed to take place. Situational influences may have direct or indirect influences on health behavior.

Commitment to Plan of Action

Competing demands are those alternative behaviors over which individuals have low control because there are environmental contingencies such as work or family care responsibilities. Competing preferences are alternative behaviors over which individuals exert relatively high control, such as choice of ice cream or apple for a snack

A health-promoting behavior is an endpoint or action outcome that is directed toward attaining positive health outcomes such as optimal wellbeing, personal fulfillment, and productive living.

Due to its focus on health promotion and disease prevention per se, its relevance to nursing actions given to individuals who are ill is obscure. But then again, this characteristic of her model also gives the concepts its uniqueness.

Pender’s principles paved a new way of viewing nursing care but then one should also be reminded that the curative aspect of nursing cannot be detached from our practice.

Community health care setting is the best avenue in promoting health and preventing illnesses. Using Pender’s Health Promotion Model, community program may be focused on activities that can improve the well-being of the people. Health promotion and disease prevention can more easily be carried out in the community, as compared to programs that aim to cure disease conditions.

Although not stated in the model, for example, in the Intensive Care Unit, health promotion model may still be applied in one way or another. This is projected towards improving health condition and prevention of further debilitating conditions. Diet modifications and performing passive and active range of motion exercises are examples of its application.