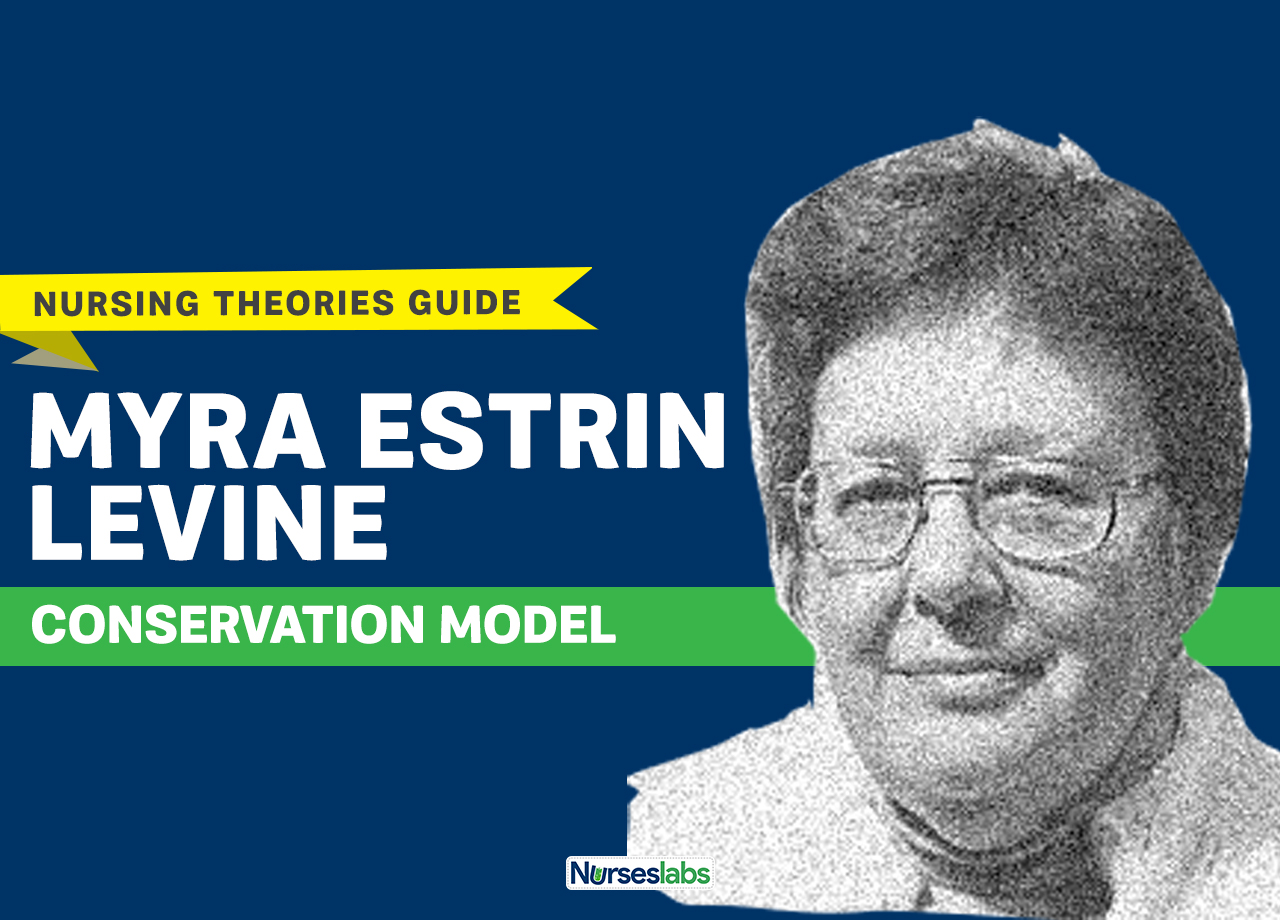 Myra Estrin Levine (1921–1996) is a nursing theorist known for her esoteric model of nursing—the Conservation Model. In this model, the goal of nursing is to promote adaptation and maintain wholeness using the four principles of conservation. Aside from being a major influence in the nursing profession, Levine was also a family woman, friend, educator, administrator, student of humanities, scholar, enabler, and confidante. She was creative and knowledgeable, opinionated, and global in her concept of nursing.

Myra Estrin Levine was born in Chicago in 1920, the first child in a family of three siblings. Her involvement throughout her father’s persistent gastrointestinal illness contributed to her interest in and devotedness to nursing.

Myra Estrin Levine had experienced several careers. She was a private duty nurse in 1944, a civilian nurse in the U.S. Army in 1945, a preclinical instructor in the physical sciences at Cook County from 1947 to 1950, director of nursing at Drexel Home in Chicago from 1950 to 1951, and surgical supervisor at both the University of Chicago Clinics from 1951 to 1952, and the Henry Ford Hospital in Detroit from 1956 to 1962.

In 1951, Levine also became a clinical instructor at Bryan Memorial Hospital in Lincoln, Nebraska and administrative supervisor at the University of Chicago. Levine also worked as a chairperson of clinical nursing at her alma mater, the Cook County School of Nursing, from 1963 to 1967. She managed to work her way up the academic ranks at Loyola University from 1967 to 1977 and the University of Illinois from 1962 to 1963 and from 1977 to 1987. She coordinated the graduate nursing program in oncology Rush University from 1974 to 1977.

As a charismatic speaker, Myra Estrin Levine was a regular presenter of programs, classes, courses, and councils, and a prolific writer concerning nursing and education. She also worked as a consultant to different hospitals and schools of nursing. In spite of the fact that she never planned to develop a nursing theory, she presented an organizational structure for teaching medical-surgical nursing and a stimulus for theory development.

“The Four Conservation Principles of Nursing” was the first statement of the conservation principles. Other preliminary works included are:

Levine is known for her publication, Introduction to Clinical Nursing, which was first published in 1969, with additional editions printed in 1973 and 1989 when she elaborated on how redundancy characterizes the availability of adaptive responses when stability is threatened.

Myra Estrin Levine was granted numerous honors, including charter fellow of the American Academy of Nursing in 1973, an honorary membership in the American Mental Health Aid to Israel in 1976, an honorary recognition from the Illinois Nurses’ Association, a Member of Sigma Theta Tau at Alpha Beta Chapter, Loyola University, enlisted in Who’s Who in American Women from 1977 to 1988, enlisted in Who’s Who in American Nursing in 1987, and elected fellow in the Institute of Medicine of Chicago from 1987 to 1991.

She was also the first recipient of the Elizabeth Russel Belford Award for excellence in teaching from Sigma Theta Tau in 1977.

Both the first and second editions of her book, Introduction to Clinical Nursing, received an American Journal of Nursing (AJN) Book of the Year awards and her 1971 book, Renewal for Nursing was translated to Hebrew. Levine was Awarded Honorary Doctorate of Humane Letters from the Loyola University of Chicago in 1992.

Myra Estrine Levine died on March 20, 1996, at the age of 75. She drops a legacy as an administrator, educator, friend, mother, nurse, scholar, student of humanities, and wife.

Every patient has a different array of adaptive responses, which vary based on personal factors including age, gender, and illness. The fundamental concept of Myra Estrin Levine’s theory is conservation. When an individual is in a phase of conservation, it means that the person has been able to adapt to the health challenges, with the slightest amount of effort. The core of Levine’s Conservation Model is to improve the physical and emotional wellbeing of a person, by considering the four domains of conservation she set out. By proposing to address the conservation of energy, structure, and personal and social integrity, this nursing theory helps guide nurses in the provision of care that will help maintain and promote the health of the patient.

What is the Conservation Model?

The core of the conservation model is to improve the physical and emotional wellbeing of a person by considering the four domains of conservation she set out. Nursing’s role in conservation is to help the person with the process of “keeping together” the total person through the least amount of effort. Levine (1989) proposed the following four principles of conservation:

“The conservation principles do not, of course, operate singly and in isolation from each other. They are joined within the individual as a cascade of life events, churning and changing as the environmental challenge is confronted and resolved in each individual’s unique way. The nurse as a caregiver becomes part of that environment, bringing to every nursing opportunity his or her own cascading repertoire of skill, knowledge, and compassion. It is a shared enterprise and each participant is rewarded.” (Levine, 1989)

Conservation of structural integrity refers to maintaining or restoring the structure of body preventing physical breakdown and promoting healing.

Conservation of personal integrity recognizes the individual as one who strives for recognition, respect, self-awareness, selfhood, and self-determination.

Conservation of social integrity exists when a patient is recognized as someone who resides within a family, a community, a religious group, an ethnic group, a political system, and a nation.

Example: Help the individual to preserve his or her place in a family, community, and society.

In this section, we will define the nursing metaparadigm and the major concepts of the theory:

Environment includes both the internal and external environment.  Three Aspects of Environment Drawn upon Bates’ (1967) Classification:

Person is the unique individual in unity and integrity, feeling, believing, thinking, and whole.

Health is the pattern of adaptive change of the whole being.

Nursing is the human interaction relying on communication, rooted in the organic dependency of the individual human being in his relationships with other human beings.

Adaptation is the process of change and integration of the organism in which the individual retains integrity or wholeness. It is possible to have degrees of adaptation.

Conservation includes joining together and is the product of adaptation including nursing intervention and patient participation to maintain a safe balance.

Social integrity is life’s meaning gained through interactions with others. Nurses intervene to maintain relationships.

Adaptation is a historical process, responses are based on past experiences, both personal and genetic

Adaptation is also specific. Each system has very specific responses. The physiologic responses that “defend oxygen supply to the brain are distinct from those that maintain the appropriate blood glucose levels.” (Levine, 1989)

Although the changes that occur are sequential, they should not be viewed as linear. Rather, Levine describes them as occurring in “cascades” in which there is an interacting and evolving effect in which one sequence is not yet completed when the next begins.

Nursing interventions based on the conservation of the patient’s energy.

The singular, yet integrated response of the individual to forces in the environment.

Stable state normal alterations in physiologic parameters in response to environmental changes; an energy sparing state, a state of conservation.

The many ways in which information, needs, and feelings are transmitted among the patient, family, nurses, and other health care workers.

Interventions that influence adaptation in a favorable way, enhancing the adaptive responses available to the person.

The following are the major assumptions of The Conservation Model.

Each individual “is an active participant in interactions with the environment… constantly seeking information from it.” (Levine, 1969)

The individual “is a sentient being and the ability to interact with the environment seems ineluctably tied to his sensory organs.”

“Change is the essence of life and it is unceasing as long as life goes on. Change is characteristic of life.” (Levine, 1973)

“Ultimately the decisions for nursing intervention must be based on the unique behavior of the individual patient.”

“Patient-centered nursing care means individualized nursing care. It is predicated on the reality of common experience: every man is a unique individual, and as such he requires a unique constellation of skills, techniques and ideas designed specifically for him.” (Levine, 1973)

Analysis of the Conservation Model

Although there are many concepts similar to that of other nursing theories, Levine’s concept of energy conservation makes it unique in guiding nursing actions.

Borrowed concepts from Bates regarding Levine’s view with the environment were not translated into how it affects the individual. The necessity of connecting incorporated concepts is crucial when trying to develop a model for nursing so as to be applied to human care.

The concept of conservation, adaptation, and integrity can be applied to any age group since every individual has the need to expand and reserve bodily energy.

The operational definition of homeostasis by Levine is in question since to achieve homeostasis, energy is continuously being used by the body thus her statement that homeostasis is an energy sparing state is quite vague in nature. Rewording might be helpful in this part of her model.

The four principles of conservation were briefly stated.

Levine has interrelated the concepts of adaptation, conservation, and integrity in a way that provides a nursing view different from that of the adjunctive disciplines with which nursing shares these concepts.

Levine’s work is logical. One thought or idea flows from the previous one and into the next.

There are many concepts with comparatively unspecified relationships and unstated assumptions.

References and resouces for this study guide about Myra Estrin Levine’s nursing theory:

Thanks for subscribing! Please check your email for further instructions.
Last updated on August 23, 2019
ADVERTISEMENT

402,098FansLike
11,448FollowersFollow
75,812FollowersFollow
3,276FollowersFollow
© 2019 Nurseslabs | Ut in Omnibus Glorificetur Deus!
This website uses cookies to give you an optimal browsing experience. By continued used of this site, you agree to our use of cookies .ACCEPT