Studying about the human anatomy and physiology could be daunting since it requires a lot of information to be memorized, more so, to be understood. But it is of utmost importance, as nurses, to know about the functioning of the human body.

To help you understand the concepts, here are some anatomy and physiology nursing mnemonics and tips.

1. Functions of the Bone

The functions of the bones in the human body are abundant and crucial – far above and beyond provision of rigidity. Its functions are further divided into three, namely: mechanical functions which include protection, structure, movement and sound transduction; synthetic function such as blood production; and metabolic functions including mineral, fat and growth storage, acid-base balance, detoxification, and endocrine organ. To summarize these functions, remember the mnemonic “Some Men Prefer Mini Skirts, But Can’t Find Enough Skin.” 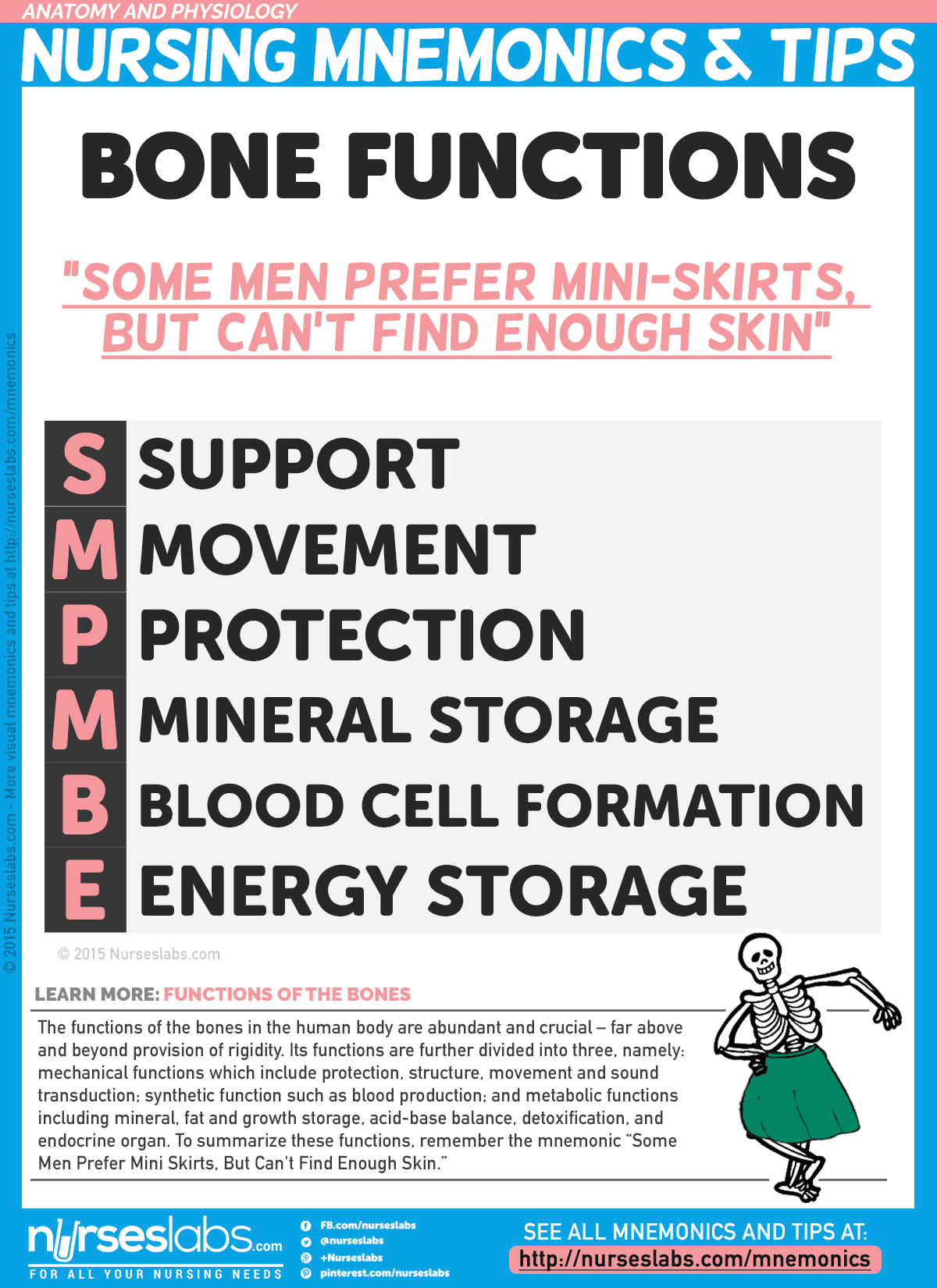 Textbooks differ as to what bones to include in the facial skeleton, making a strict distinction between bones of the neurocranium and viscerocranium. The hyoid, ethmoid, and sphenoid bones are sometimes included, but otherwise considered part of the neurocranium. Others also include bones that can be seen in the frontal aspect of the skull such as the frontal bone. Note VAIN MM PLZ so you don’t miss out any of the facial bones. 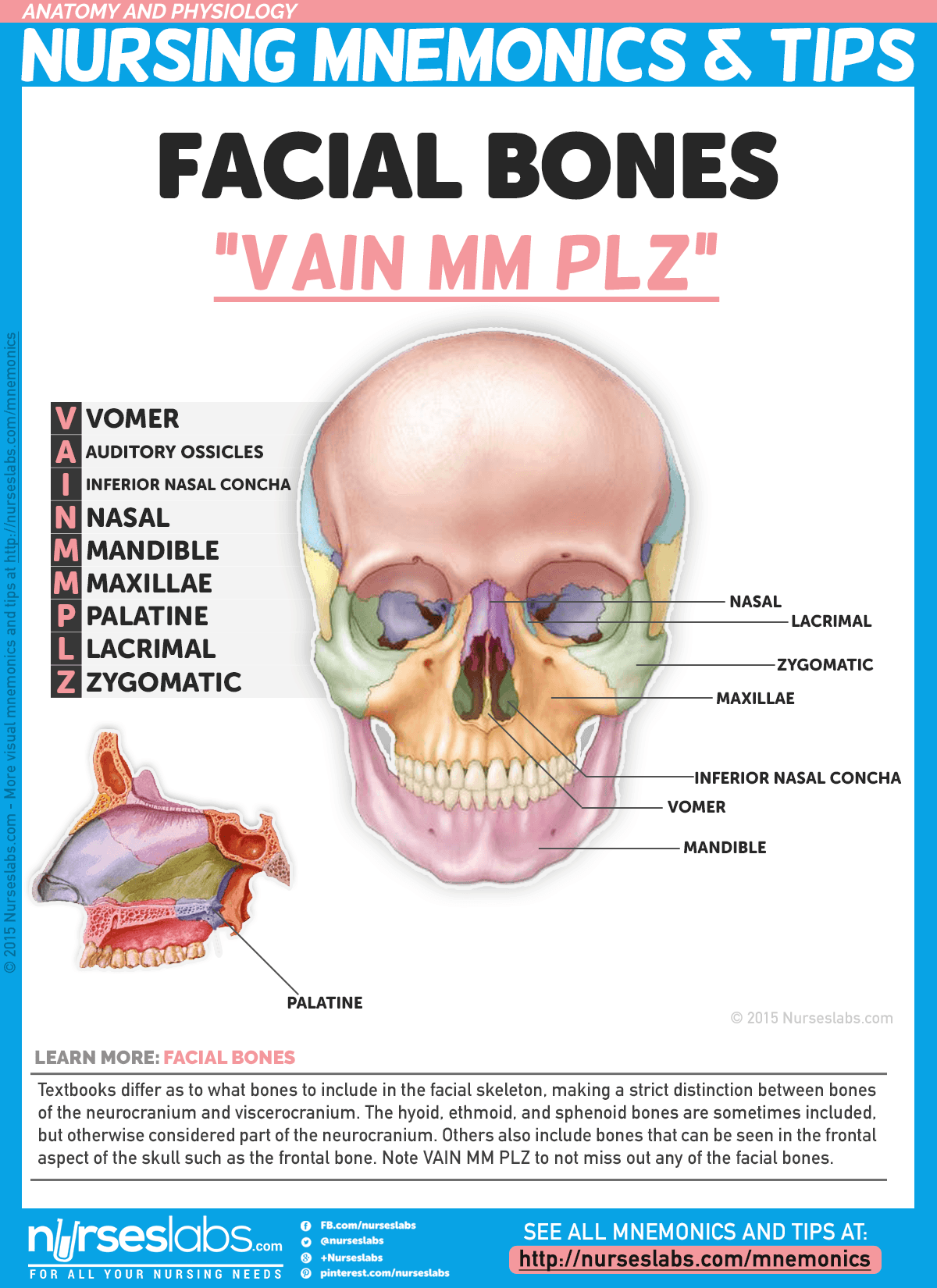 The neurocranium is comprised of eight bones: occipital, two temporal bones, two parietal bones, sphenoid, ethmoid, and the frontal bone. They form major portions of the skull and protect the brain. 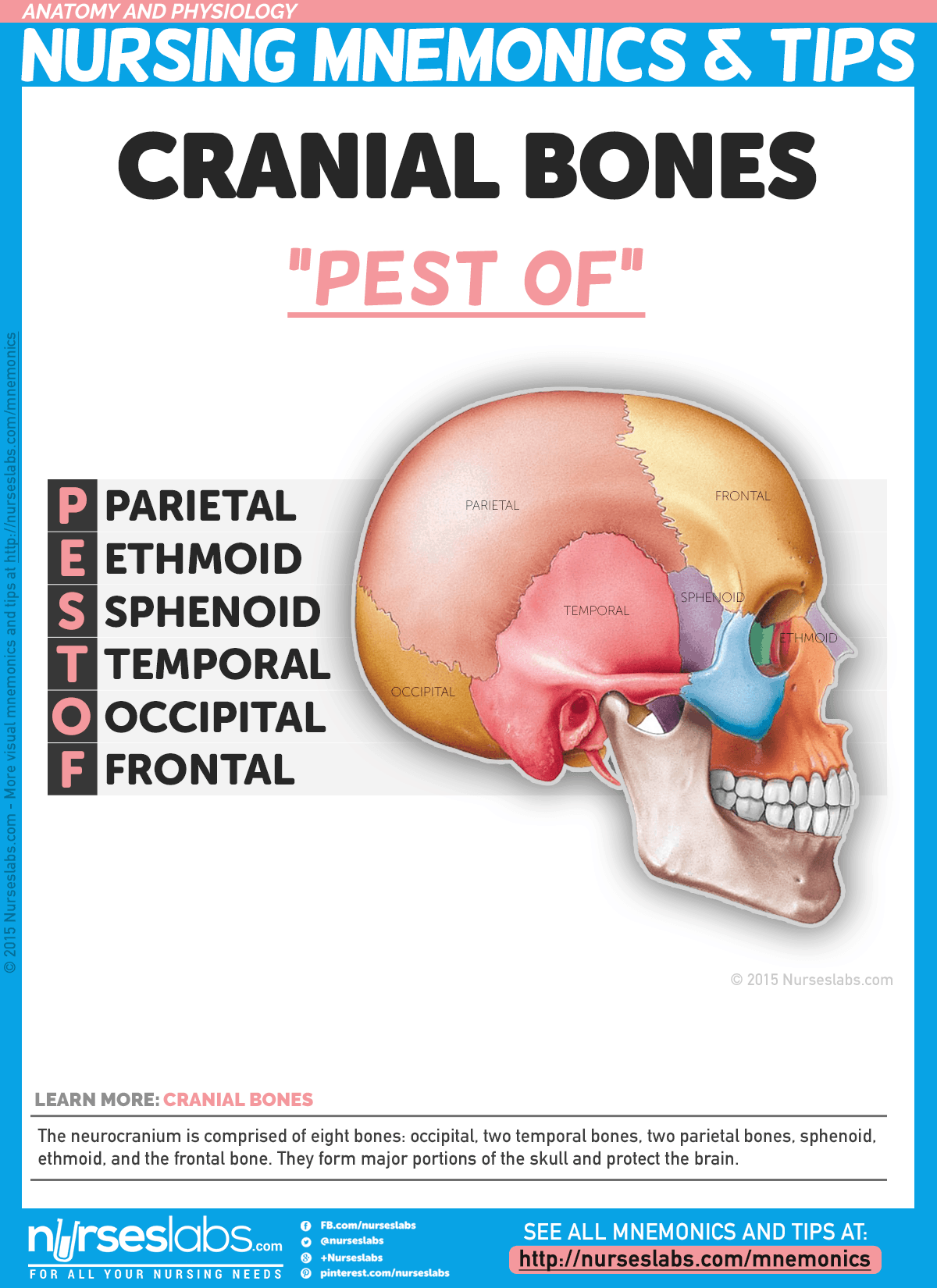 4. Layers of the Epidermis

Epidermis is the outermost layer of skin. While epithelium is a layer of cells covering most of the organs separately (eg. epithelium of digestive system and epithelium of respiratory system), the epidermis itself consists of a layer of epithelial cells (epithelium). The mnemonic “Come, Let’s Get Sun Burned” will let you not forget the layers of the epidermis. 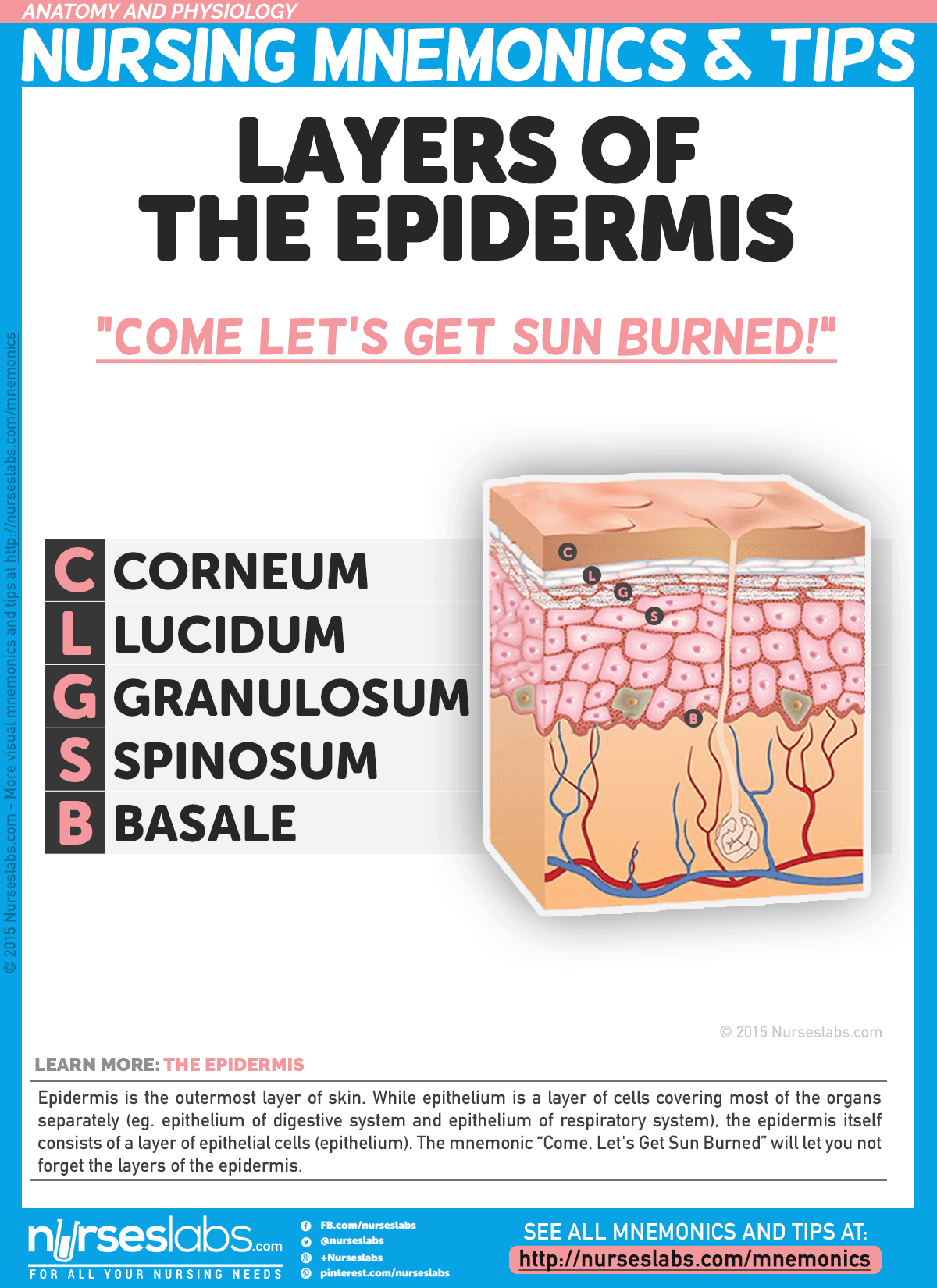 5. Functions of the Epithelium: “PASSIFS”

Epithelium is one of the four basic types of animal tissue, along with connective tissue, muscle tissue and nervous tissue. It refers to layers of cells that line hollow organs and glands. It is also those cells that make up the outer surface of the body. The cells vary in structure according to their function, which may be protective, secretory, or absorptive. Just remember the mnemonic PASSIFS for its functions. 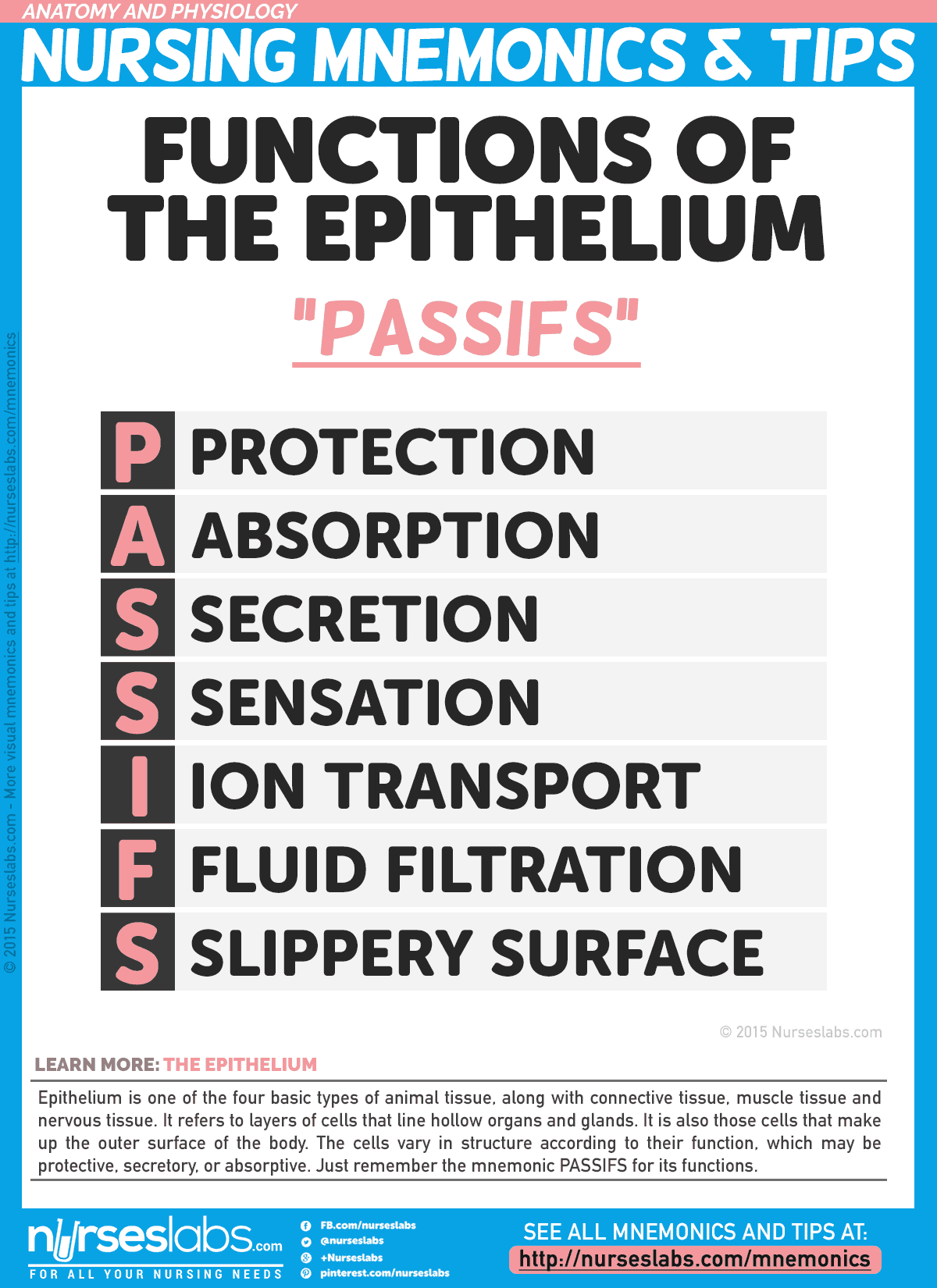 More will be added soon…

Nurse Salary: How Much Do Registered Nurses Make?