The trillions of cells in the body require an abundant and continuous supply of oxygen to carry out their vital functions. We cannot “do without oxygen” for even a little while, as we can without food or water.

Functions of the Respiratory System

The functions of the respiratory system are:

Anatomy of the Respiratory System

The organs of the respiratory system include the nose, pharynx, larynx, trachea, bronchi, and their smaller branches, and the lungs, which contain the alveoli. 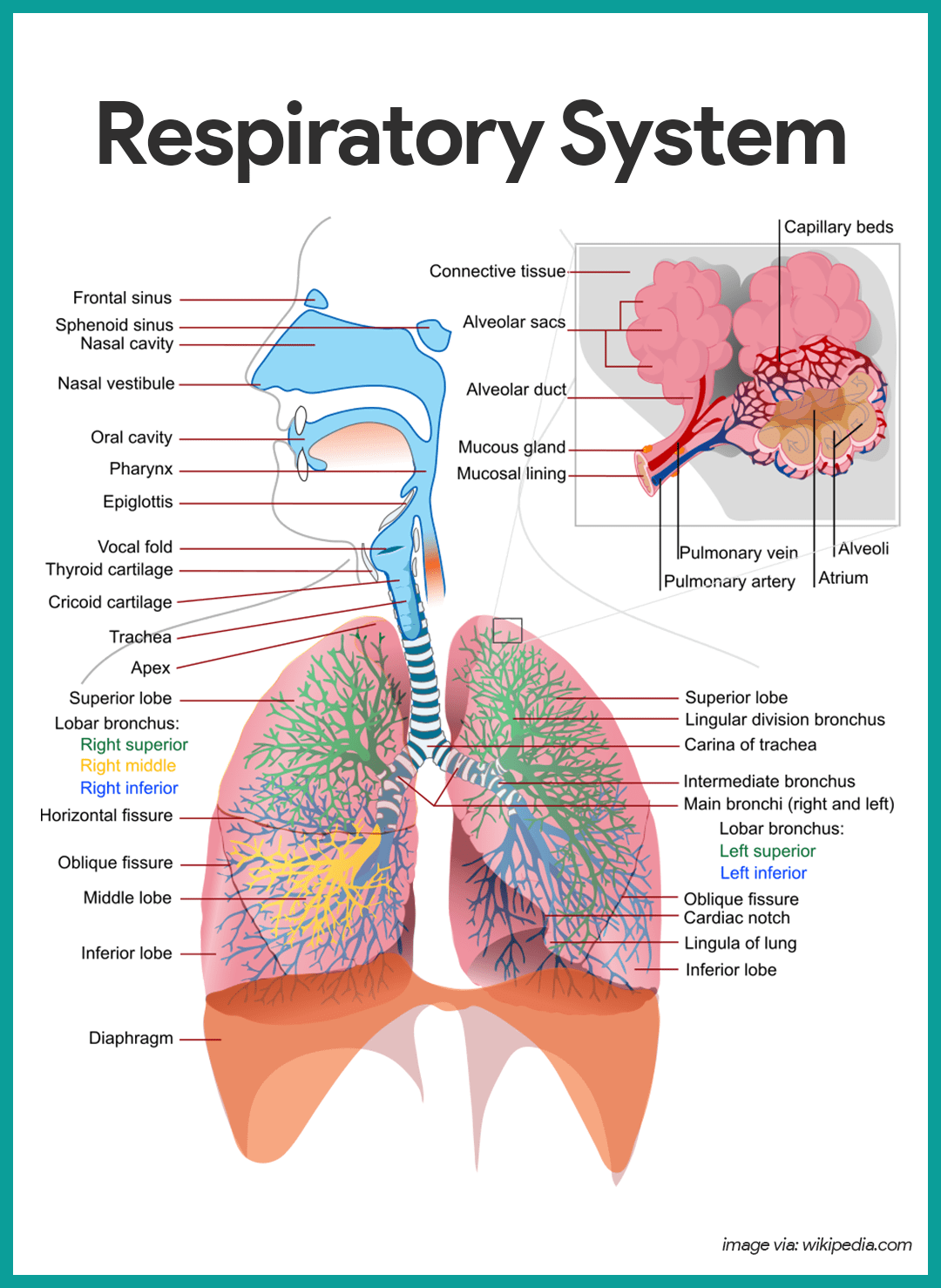 The nose is the only externally visible part of the respiratory system.

The larynx or voice box routes air and food into the proper channels and plays a role in speech.

Physiology of the Respiratory System

The major function of the respiratory system is to supply the body with oxygen and to dispose of carbon dioxide. To do this, at least four distinct events, collectively called respiration, must occur. 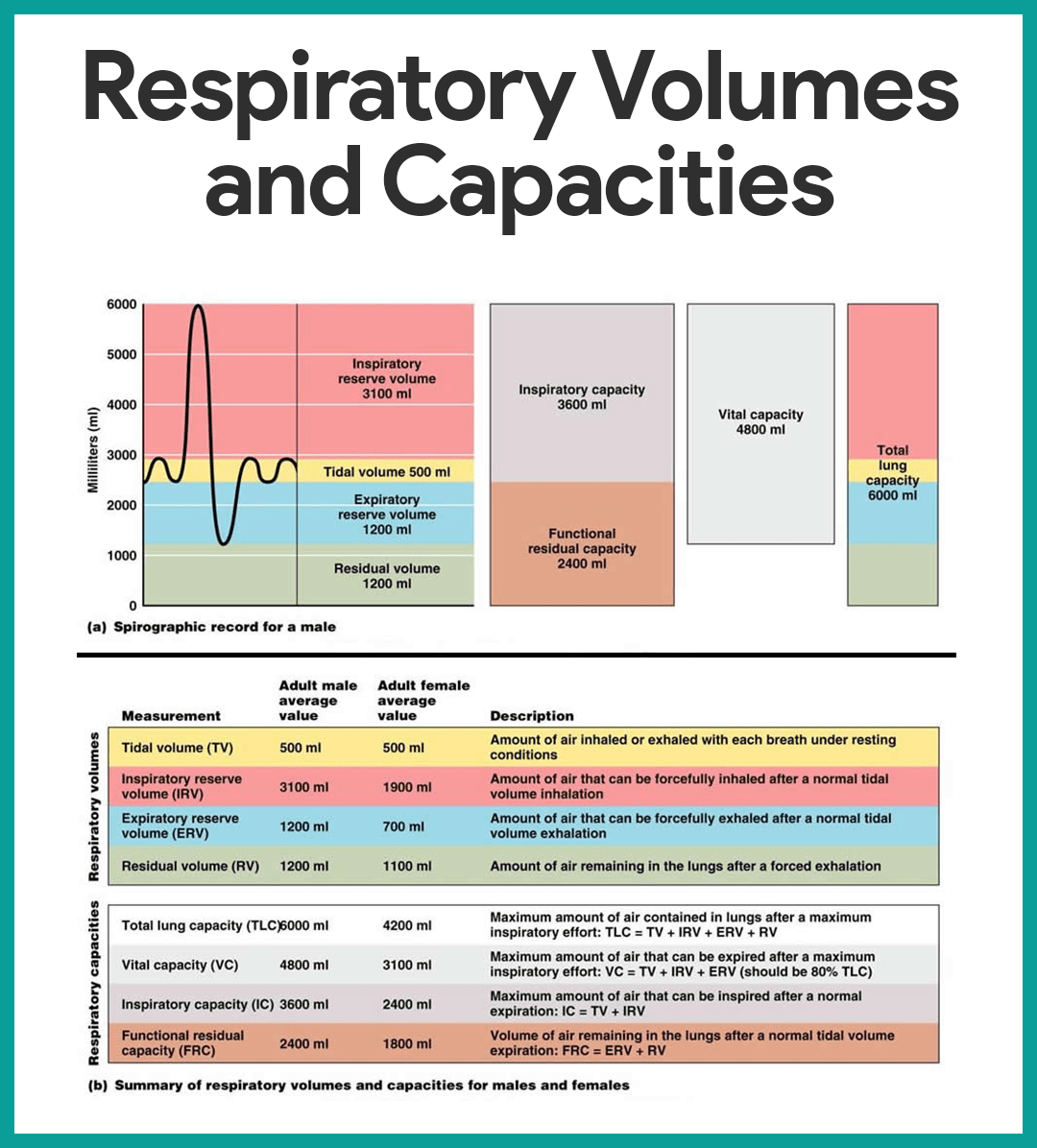 1. Which of the following descriptions regarding the larynx is CORRECT?

A. The most inferior cartilage in the larynx is the epiglottis.
B. Unlike the other cartilages of the larynx, the epiglottis consists of hyaline cartilage.
C. The larynx contains four unpaired cartilages.
D. When the vestibular folds come together, they prevent air from leaving the lungs.

1. Answer: D. When the vestibular folds come together, they prevent air from leaving the lungs.

D: When the vestibular folds come together, they prevent air from leaving the lungs, such as when a person holds his breath. Along with the epiglottis, the vestibular folds also prevent food and liquids from entering the larynx.
A: The most inferior cartilage of the larynx is the unpaired cricoid cartilage, which forms the base of the larynx on which the other cartilages rest.
B: The epiglottis differs from the other cartilages in that it consists of elastic cartilage rather than hyaline cartilage.
C: The larynx consists of an outer casing of nine cartilages that are connected to one another by muscles and ligaments. Three of the nine cartilages are unpaired, and six of them form three pairs.

2. Given these respiratory passageways:

From largest to smallest, the accurate order for these passageways is:

The main bronchi branch many times to form the tracheobronchial tree. Within the lungs, the main airways (bronchi) branch off into smaller and smaller passageways. The conducting portion is made up of nasal cavities, nasopharynx, larynx, trachea, bronchi and bronchioles. The trachea branches to give rise to two primary (main) bronchi. These then branch successively to give rise in turn to secondary and tertiary bronchi. These then branch to give rise to several orders of progressively smaller airways called bronchioles, the smallest of which are called terminal bronchioles. These are the last components of the conducting portion of the respiratory system. Terminal bronchioles give rise to respiratory bronchioles, which ultimately lead to the alveoli.

3. The right lung has ___ lobes and ___ bronchopulmonary segments.

4. The pleura that covers the surface of the lungs is the:

C: The visceral pleura covers the surface of the lung.
A,B: The pleural cavity, between the parietal and visceral pleurae, is filled with a small volume of pleural fluid produced by the pleural membranes.
D: The parietal pleura lines the walls of the thorax, diaphragm, and mediastinum.

5. The muscles of inspiration include the diaphragm and internal intercostal muscles. The statement is:

Muscles associated with the ribs are responsible for ventilation. The muscles of inspiration include the diaphragm and muscles that elevate the ribs and sternum, such as the external intercostals.

6. During expiration, decreased thoracic volume results in increased pressure inside the alveoli, therefore, air moves out of the lungs. The statement is:

During expiration, the thoracic volume decreases, producing a decrease in alveolar volume. Consequently, alveolar pressure increases above the air pressure outside the body, and air flows from the alveoli through the respiratory passage to the outside.

7. It is the volume of air inspired or expired with each breath. At rest, quiet breathing results in a volume of about 500 milliliters (mL).

8. Given these divisions of the pharynx:

From superior to inferior, the correct sequence for the divisions of the pharynx is:

9. Which of the following is NOT TRUE about the paranasal sinuses?

9. Answer: A. They increase the weight of the skull.

Paranasal sinuses are air-filled spaces within bone. The maxillary, frontal, ethmoidal, and sphenoidal sinuses are named after the bones in which they are located. The paranasal sinuses open into the nasal cavity and are lined with a mucous membrane. They reduce the weight of the skull, produce mucus, and influence the quality of voice by acting as resonating chambers.

A. the choane
B. the nasal septa
C. the hard palate
D. the conchae