The nervous system is the master controlling and communicating system of the body. Every thought, action, and emotion reflects its activity. Its signaling device, or means of communicating with body cells, is electrical impulses, which are rapid and specific and cause almost immediate responses.

Functions of the Nervous System

To carry out its normal role, the nervous system has three overlapping functions.

Anatomy of the Nervous System

The nervous system does not work alone to regulate and maintain body homeostasis; the endocrine system is a second important regulating system.

Organization of the Nervous System 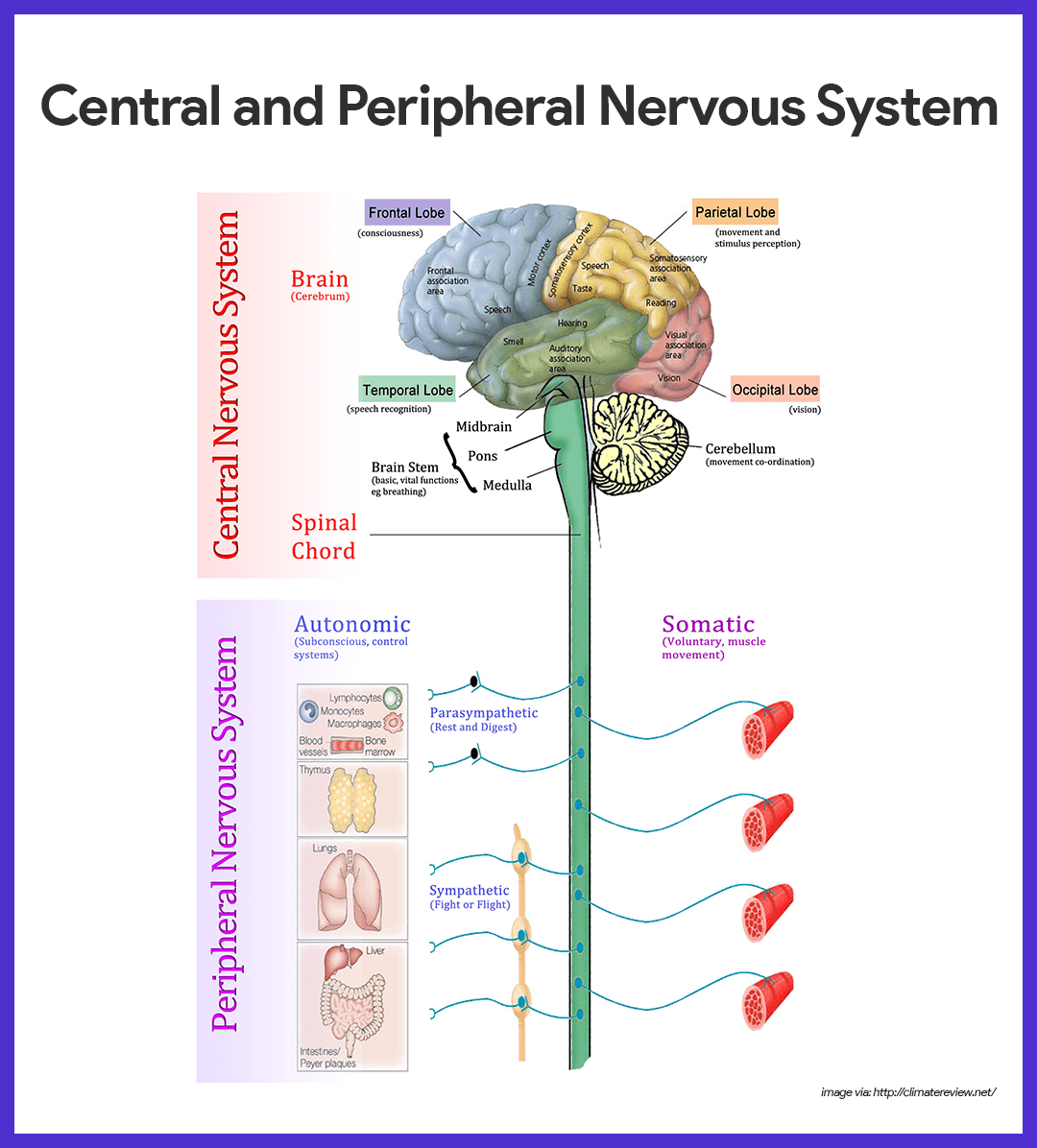 The functional classification scheme is concerned only with PNS structures.

Even though it is complex, nervous tissue is made up of just two principal types of cells- supporting cells and neurons.

Supporting cells in the CNS are “lumped together” as neuroglia, literally mean “nerve glue”.

Neurons, also called nerve cells, are highly specialized to transmit messages (nerve impulses) from one part of the body to another.

During embryonic development, the CNS first appears as a simple tube, the neural tube, which extends down the dorsal median plan of the developing embryo’s body.

Because the brain is the largest and most complex mass of nervous tissue in the body, it is commonly discussed in terms of its four major regions – cerebral hemispheres, diencephalon, brain stem, and cerebellum.

The paired cerebral hemispheres, collectively called cerebrum, are the most superior part of the brain, and together are a good deal larger than the other three brain regions combined.

The diencephalon, or interbrain, sits atop the brain stem and is enclosed by the cerebral hemispheres.

The brain stem is about the size of a thumb in diameter and approximately 3 inches long.

The large, cauliflower-like cerebellum projects dorsally from under the occipital lobe of the cerebrum.

Protection of the Central Nervous System

Nervous tissue is very soft and delicate, and the irreplaceable neurons are injured by even the slightest pressure, so nature has tried to protect the brain and the spinal cord by enclosing them within bone (the skull and vertebral column), membranes (the meninges), and a watery cushion (cerebrospinal fluid).

The three connective tissue membranes covering and protecting the CNS structures are the meninges.

Cerebrospinal fluid (CSF) is a watery “broth” similar in its makeup to blood plasma, from which it forms.

No other body organ is so absolutely dependent on a constant internal environment as is the brain, and so the blood-brain barrier is there to protect it.

The cylindrical spinal cord is a glistening white continuation of the brain stem.

Gray Matter of the Spinal Cord and Spinal Roots

The gray matter of the spinal cord looks like a butterfly or a letter H in cross section.

White Matter of the Spinal Cord

The peripheral nervous system consists of nerves and scattered groups of neuronal cell bodies (ganglia) found outside the CNS.

Structure of a Nerve

A nerve is a bundle of neuron fibers found outside the CNS.

The 12 pairs of cranial nerves primarily serve the head and the neck.

The 31 pairs of human spinal nerves are formed by the combination of the ventral and dorsal roots of the spinal cord.

The autonomic nervous system (ANS) is the motor subdivision of the PNS that controls body activities automatically.

Anatomy of the Parasympathetic Division

The parasympathetic division allows us to “unwind” and conserve energy.

Anatomy of the Sympathetic Division

The sympathetic division mobilizes the body during extreme situations, and is also called the thoracolumbar division because its preganglionic neurons are in the gray matter of the spinal cord from T1 through L2.

Physiology of the Nervous System

The physiology of the nervous system involves a complex journey of impulses.

How the nerve impulse actually works is detailed below.

Communication of Neurons at Synapses

The events occurring at the synapse are arranged below.

Body organs served by the autonomic nervous system receive fibers from both divisions.

The sympathetic division is often referred to as the “fight-or-flight” system.

The parasympathetic division is most active when the body is at rest and not threatened in any way.

1.The cell body of all sensory neurons is located within the:

2. Which of the following is referred to as either physical barriers or physiologic processes (transport system) that separate the circulating blood from the brain extracellular fluid in the central nervous system (CNS)?

3. A male client was involved in a vehicular accident and developed an amnesia. He is likely having a damaged in which of the following?

4. A client went to the emergency department with a possible brain damage as evidenced by loss of coordination of motor movement, and staggering, wide based walking. The client is most likely having a damage in the:

5. It is a type of nerve cell that protects CNS from infection and become phagocytic in response to inflammation

6. Which of the following manifestations is consistent with a client who sustained a traumatic left parietal lobe injury?

6. Answer: A. Difficulty with writing, inability to perceive objects normally

7. Which among cranial nerves are mixed nerves that supply parasympathetic to viscera of thorax and abdomen?

8. The ___________ is the innermost meningeal layer, clings tightly to the surface of the brain and spinal cord, following every fold.

9. Nurse Jerick is performing a caloric testing of the vestibulo-ocular reflex of an unconscious client. Warm water is poured into the left auditory canal. The client exhibit conjugate eye movement toward the right followed by nystagmus toward the left. The nurse understands that the client is exhibiting a:

10. Which of the following is the rationale to perform a spinal tap on a newly diagnosed client with leukemia?

A. To rule out bacterial meningitis
B. To check if leukemia has spread to the cerebral spinal fluid
C. To classify the type of leukemia
D. To lower the pressure in the brain

10. Answer: B. To check if leukemia has spread to the cerebral spinal fluid