Children are fascinated by the workings of the digestive system: they relish crunching a potato chip, delight in making “mustaches” with milk, and giggle when their stomach growls. As adults, we know that a healthy digestive system is essential for good health because it converts food into raw materials that build and fuel our body cells.

Functions of the Digestive System

The functions of the digestive system are:

Anatomy of the Digestive System

The organs of the digestive system can be separated into two main groups: those forming the alimentary canal and the accessory digestive organs. 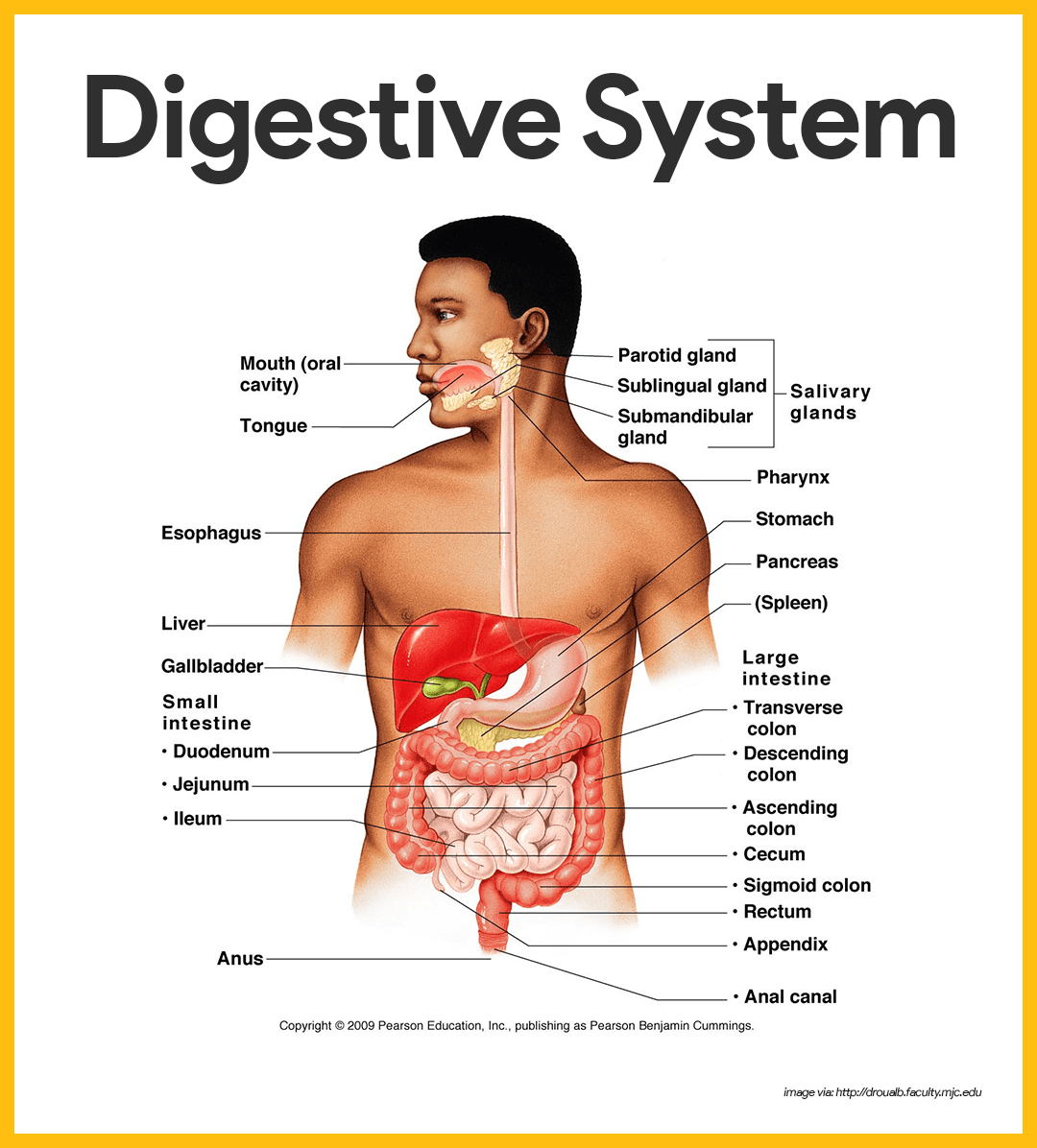 Organs of the Alimentary Canal

The alimentary canal, also called the gastrointestinal tract, is a continuous, hollow muscular tube that winds through the ventral body cavity and is open at both ends. Its organs include the following:

Food enters the digestive tract through the mouth, or oral cavity, a mucous membrane-lined cavity.

From the mouth, food passes posteriorly into the oropharynx and laryngopharynx.

The esophagus or gullet, runs from the pharynx through the diaphragm to the stomach.

Different regions of the stomach have been named, and they include the following: 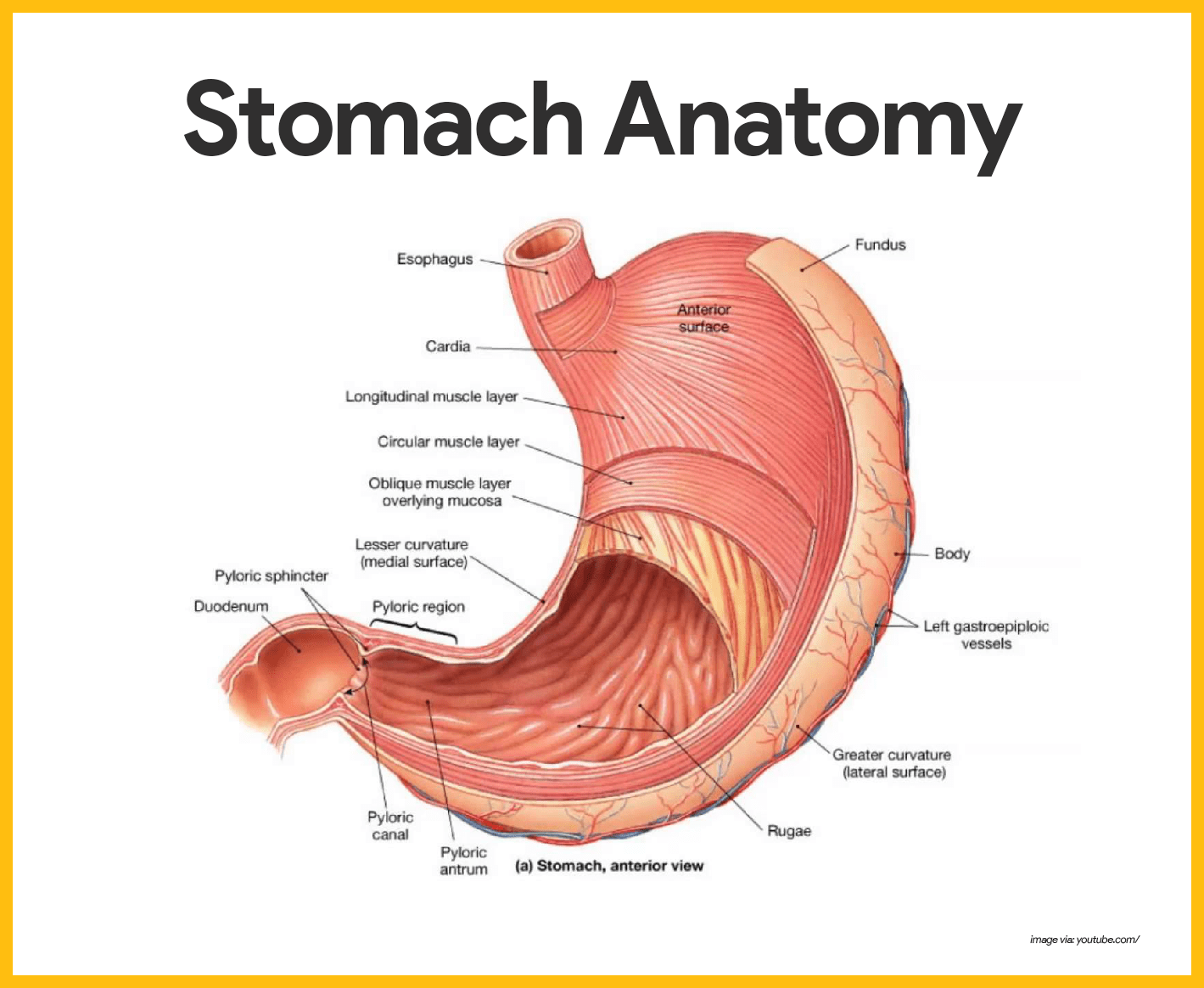 The small intestine is the body’s major digestive organ.

The large intestine is much larger in diameter than the small intestine but shorter in length. 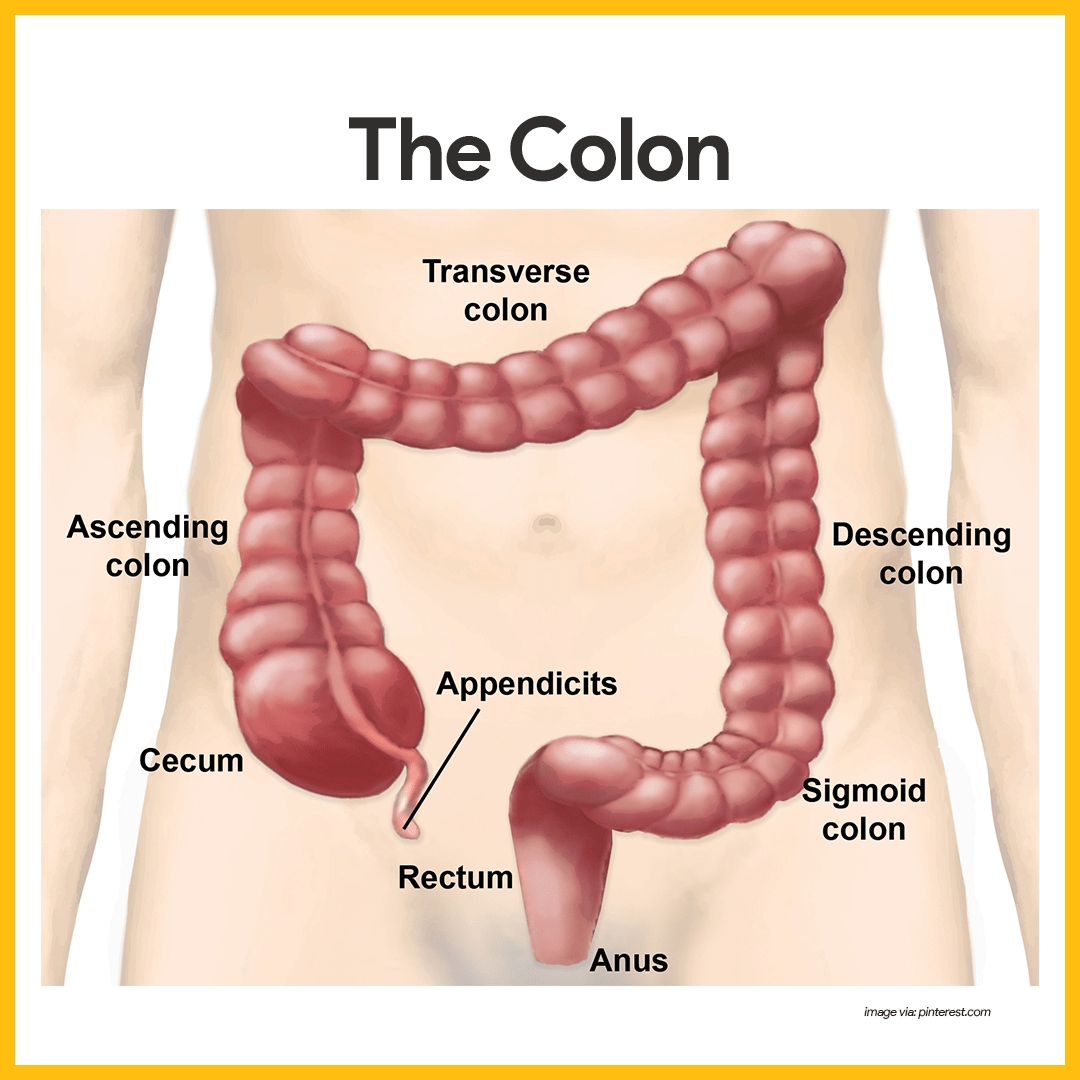 Other than the intestines and the stomach, the following are also part of the digestive system:

The role the teeth play in food processing needs little introduction; we masticate, or chew, by opening and closing our jaws and moving them from side to side while continuously using our tongue to move the food between our teeth. 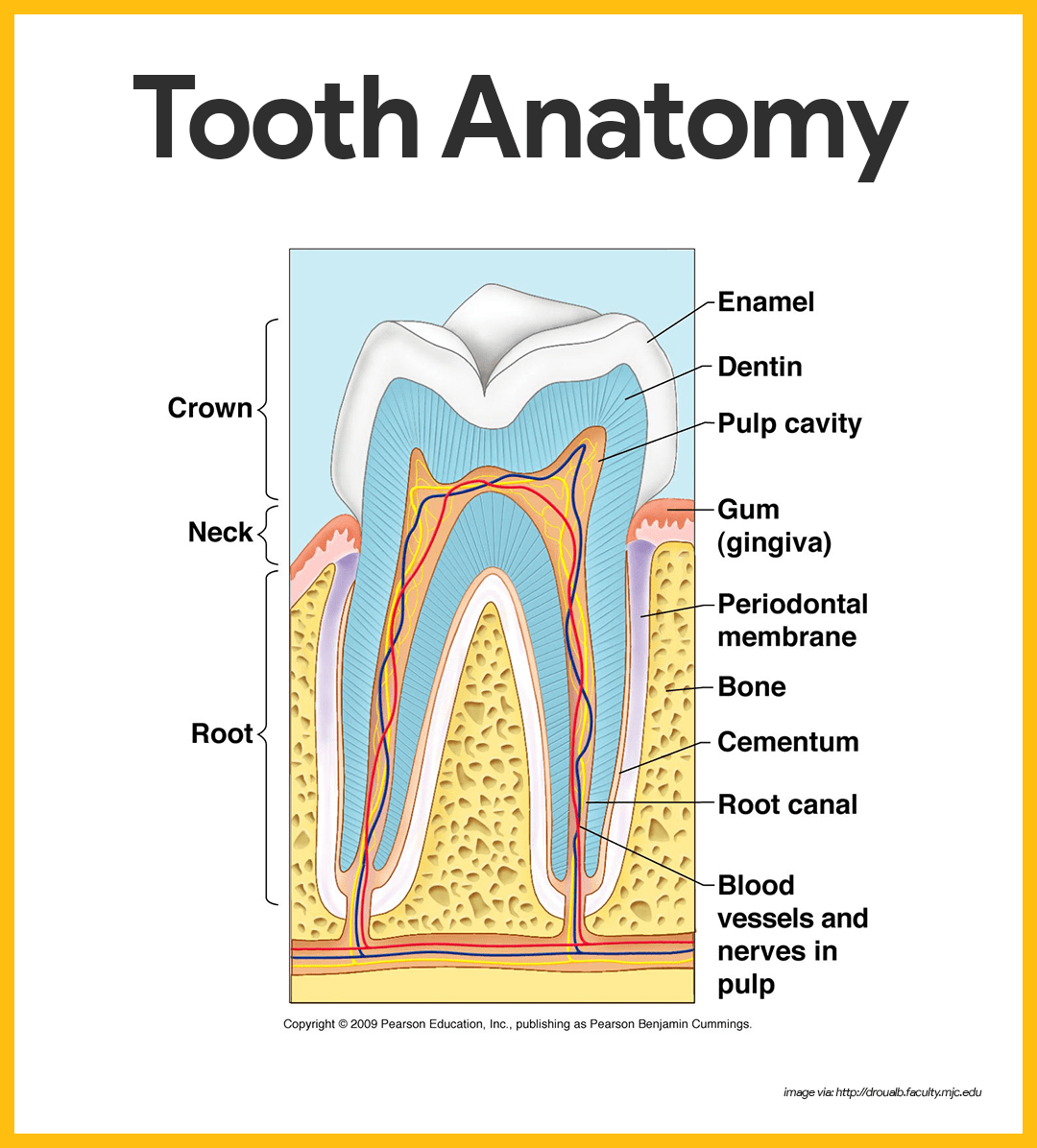 Three pairs of salivary glands empty their secretions into the mouth.

Only the pancreas produces enzymes that break down all categories of digestible foods. 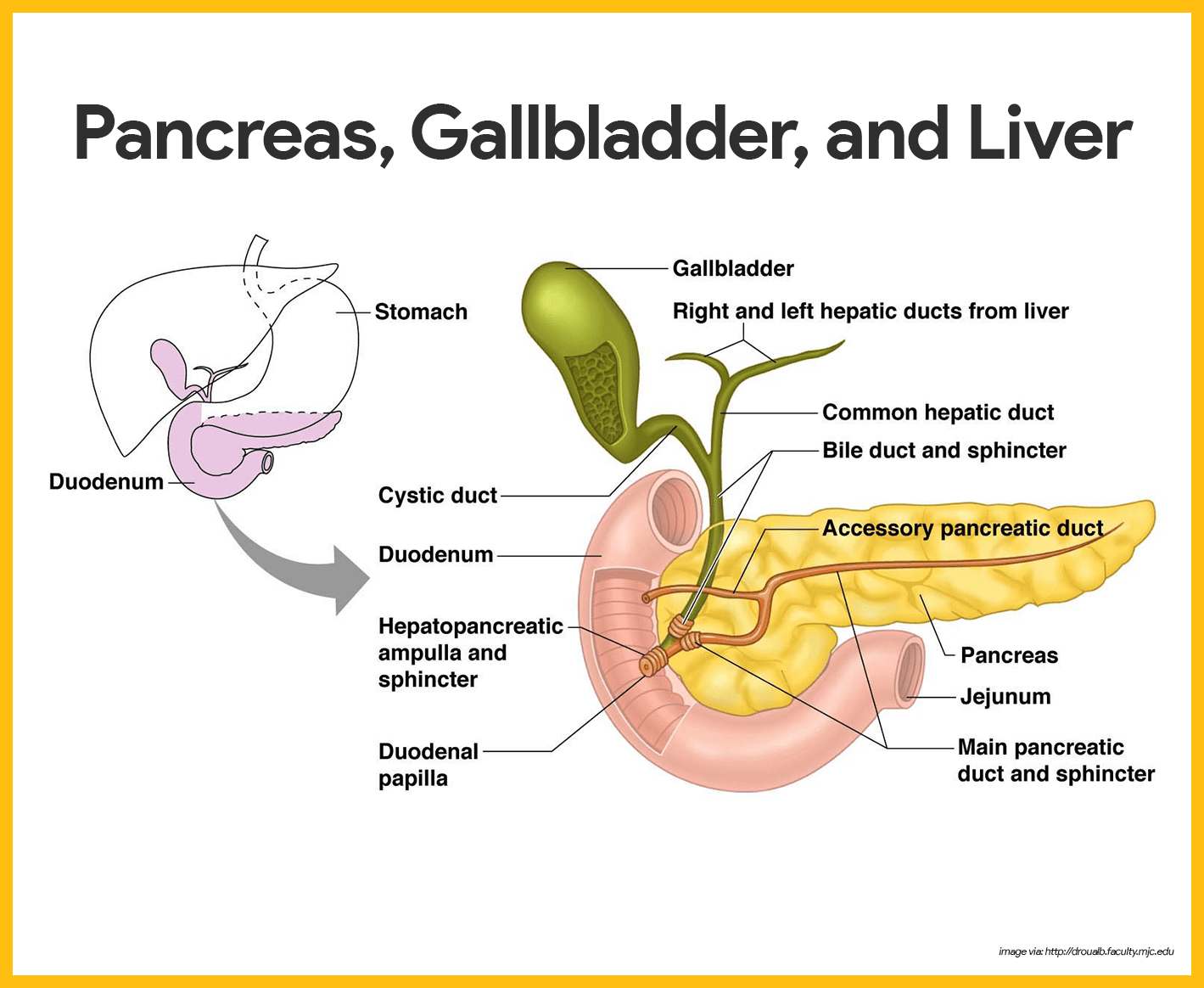 The liver is the largest gland in the body.

While in the gallbladder, bile is concentrated by the removal of water.

Physiology of the Digestive System

Specifically, the digestive system takes in food (ingests it), breaks it down physically and chemically into nutrient molecules (digests it), and absorbs the nutrients into the bloodstream, then, it rids the body of indigestible remains (defecates).

Activities Occurring in the Mouth, Pharynx, and Esophagus

The activities that occur in the mouth, pharynx, and esophagus are food ingestion, food breakdown, and food propulsion.

Once food is placed in the mouth, both mechanical and chemical digestion begin.

For food to be sent on its way to the mouth, it must first be swallowed.

Activities of the Stomach

The activities of the stomach involve food breakdown and food propulsion.

The sight, smell, and taste of food stimulate parasympathetic nervous system reflexes, which increase the secretion of gastric juice by the stomach glands

Peristalsis is responsible for the movement of food towards the digestive site until the intestines.

Activities of the Small Intestine

The activities of the small intestine are food breakdown and absorption and food propulsion.

Food reaching the small intestine is only partially digested.

Peristalsis is the major means of propelling food through the digestive tract.

Activities of the Large Intestine

The activities of the large intestine are food breakdown and absorption and defecation.

What is finally delivered to the large intestine contains few nutrients, but that residue still has 12 to 24 hours more to spend there.

Propulsion of the Residue and Defecation

When presented with residue, the colon becomes mobile, but its contractions are sluggish or short-lived.

Here’s a 10-item quiz about the study guide:

In Exam Mode: All questions are shown but the results, answers, and rationales (if any) will only be given after you’ve finished the quiz.

Text Mode: All questions and answers are given on a single page for reading and answering at your own pace. Be sure to grab a pen and paper to write down your answers.

1. All of these are among the four tunics found throughout the digestive tract EXCEPT:

2. Which of the following are functions of the tongue? Select all that apply.

A. Crucial organ for speech
B. Primary organ for taste
C. Vital for swallowing food
D. Manipulates food for mastication
E. All of these are functions of the tongue

2. Answer: E. All of these are functions of the tongue

4. Which of these is NOT a pair of salivary glands?

5. Which statement about the esophagus is TRUE? Select all that apply.

A. It is a cartilaginous tube.
B. It extends from the nasal cavity to the stomach.
C. It lies anterior to the trachea.
D. It has upper and lower sphincters.
E. All statements describe the esophagus.

5. Answer: D. It has upper and lower sphincters.

6. All of these structures are matched with the correct description EXCEPT:

6. Answer: A. Cardiac region: the area closest to the small intestine

7. The saliva does NOT contain:

8. Which statements best describe mechanical digestion? Select all that apply.

A. It breaks large food particles into smaller ones.
B. It involves the breaking of covalent chemical bonds in organic molecules by digestive enzymes.
C. It begins in the stomach, where some small, lipid-soluble molecules, such as alcohol and aspirin, can diffuse through the stomach epithelium into the circulation.
D. It requires carrier molecules and includes facilitated diffusion, cotransport, and active transport.
E. All the statements describe mechanical digestion.

8. Answer: A. It breaks large food particles into smaller ones.

9. The greatest volume of gastric secretion occurs during:

10. Which of the following produce gastrin?

Other anatomy and physiology study guides: