Although the word skeleton comes from the Greek word meaning “dried-up body”, our internal framework is so beautifully designed and engineered that it puts any modern skyscraper to shame.

Functions of the Skeletal System

Anatomy of the Skeletal System 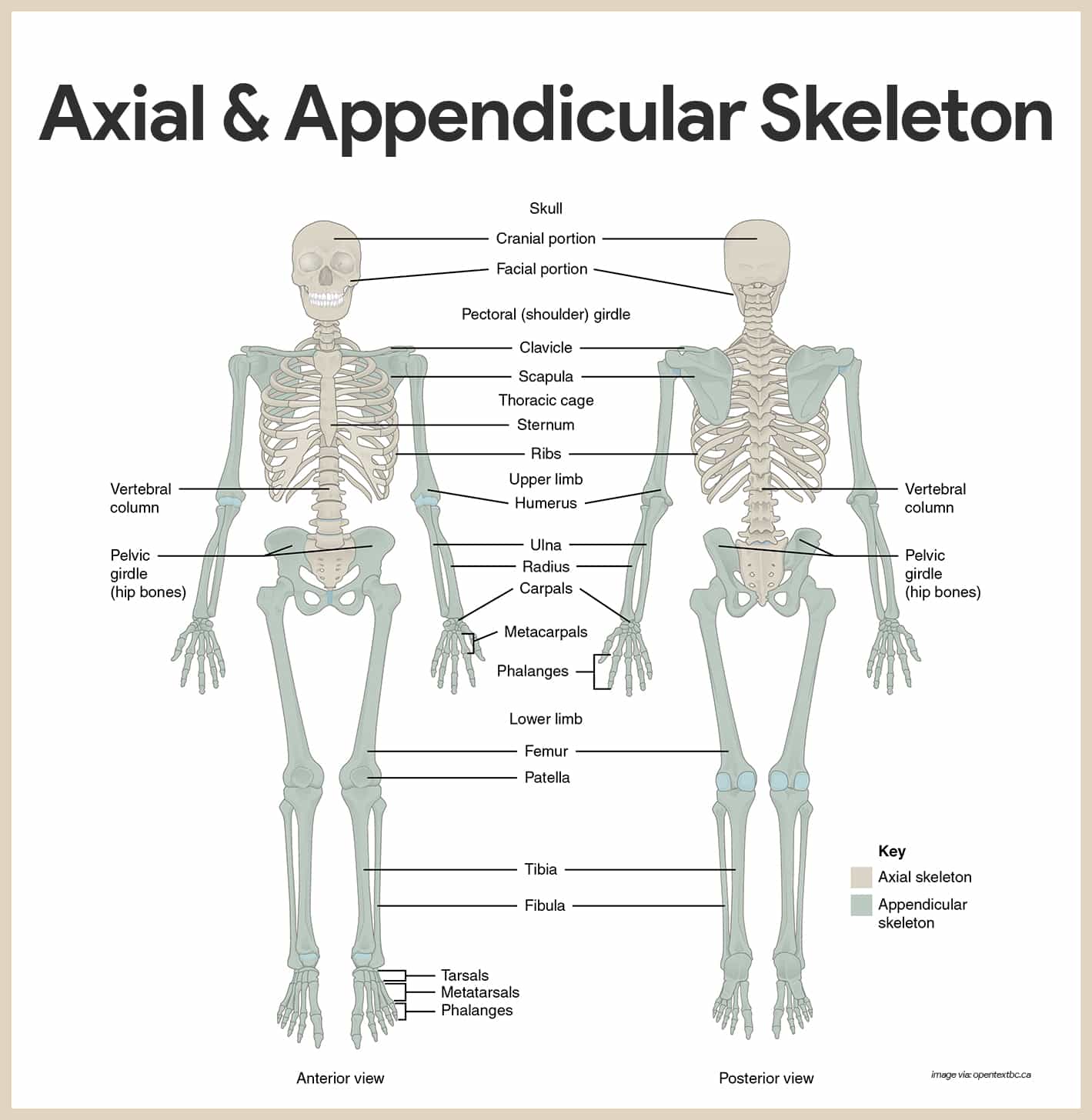 The adult skeleton is composed of 206 bones and there are two basic types of osseous, or bone, tissue: compact bone and spongy bone, and are classified into four groups according to shape: long, short, flat, and irregular. 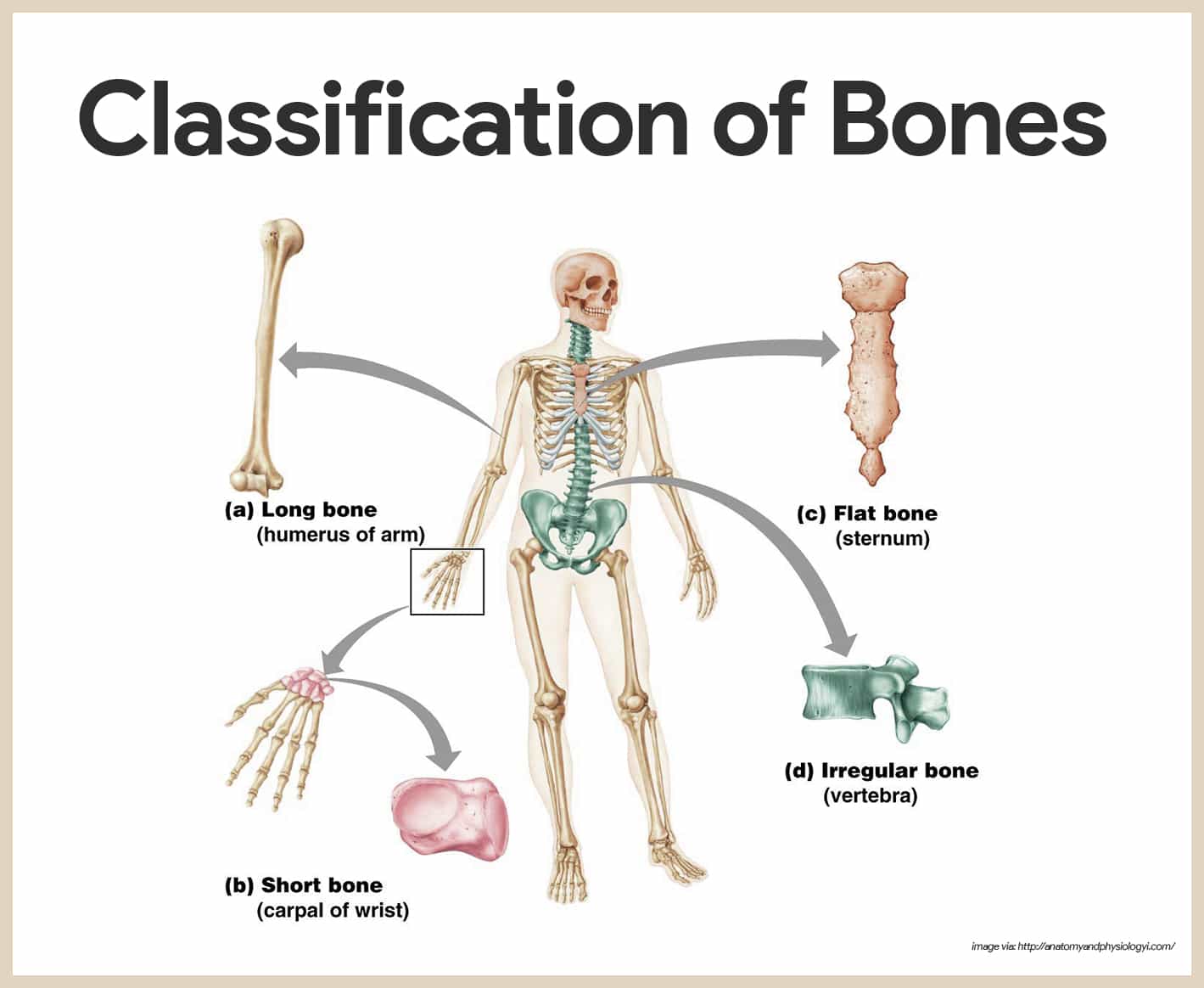 The structure of a long bone is shown both through gross anatomy and microscopic anatomy.

The gross structure of a long bone consists of the following:

To the naked eye, spongy bone has a spiky, open appearance, whereas compact bone appears to be very dense.

The axial skeleton, which forms the longitudinal axis of the body, is divided into three parts: the skull, the vertebral column, and the bony thorax.

The skull is formed by two sets of bones: the cranium and the facial bones.

The cranium encloses and protects the fragile brain tissue and is composed of eight large flat bones. 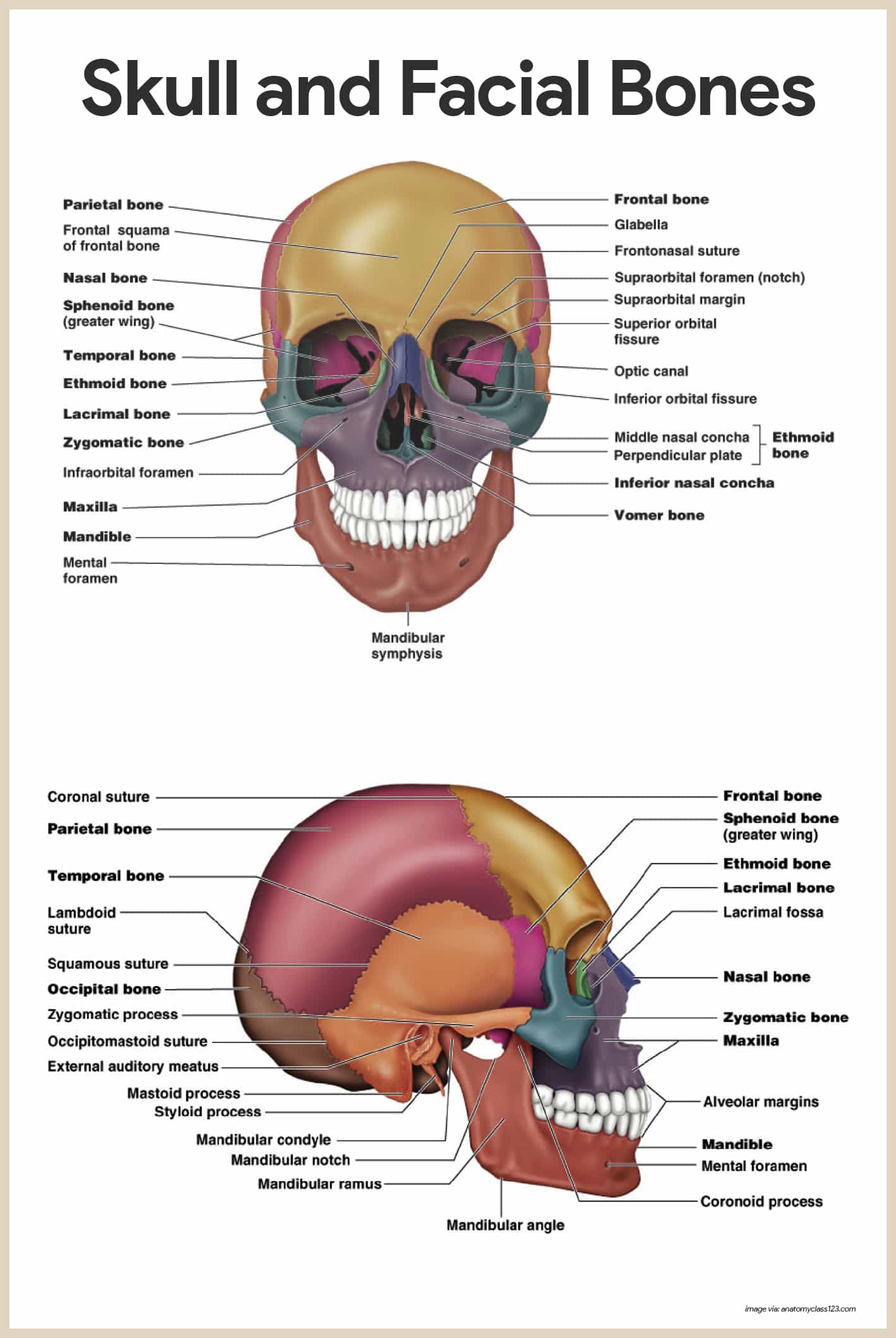 There are several bone markings that appear at the temporal bone:

Fourteen bones compose the face; twelve are paired, only the mandible and vomer are single.

Though not really part of the skull, the hyoid bone is closely related to the mandible and temporal bones.

The skull of a fetus or newborn infant is different in many ways from an adult skull.

Serving as the axial support of the body, the vertebral column, or spine, extends from the skull, which it supports, to the pelvis, where it transmits the weight of the body to the lower limbs. 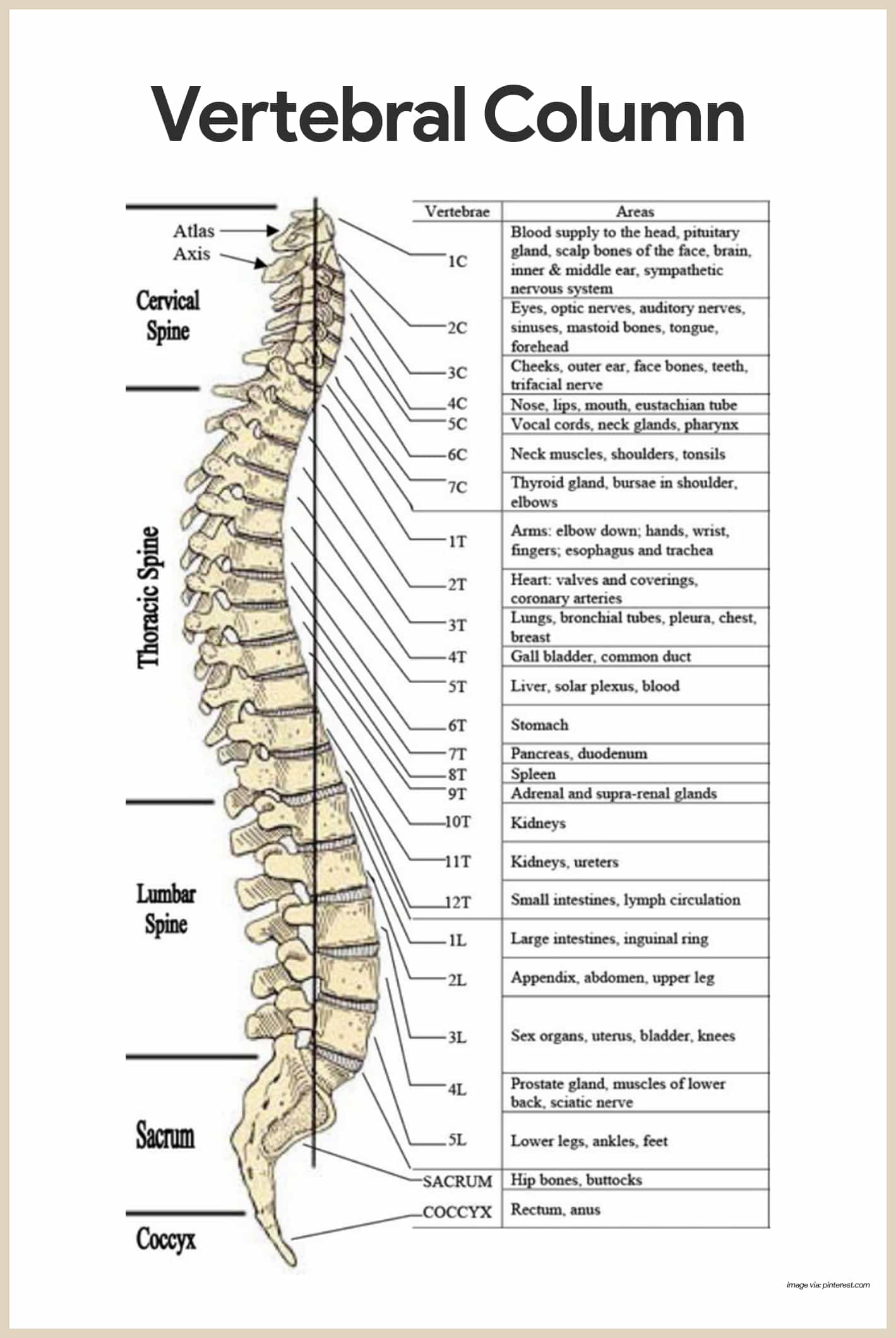 The seven cervical vertebrae (C1 to C7) form the neck region of the spine.

The twelve thoracic vertebrae (T1 to T12) are all typical.

The sacrum is formed by the fusion of five vertebrae. 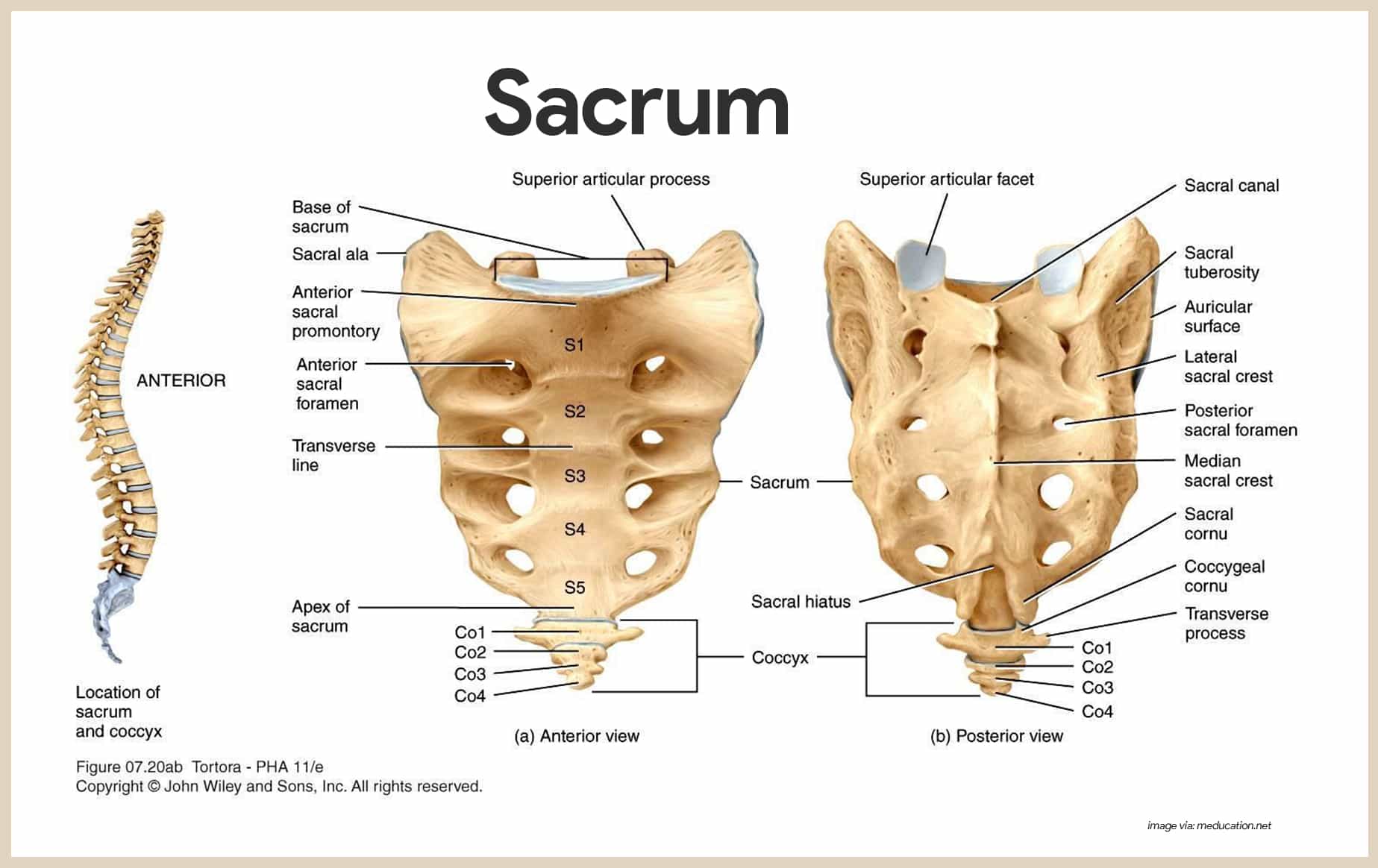 The coccyx is formed from the fusion of three to five tiny, irregular shaped vertebrae. 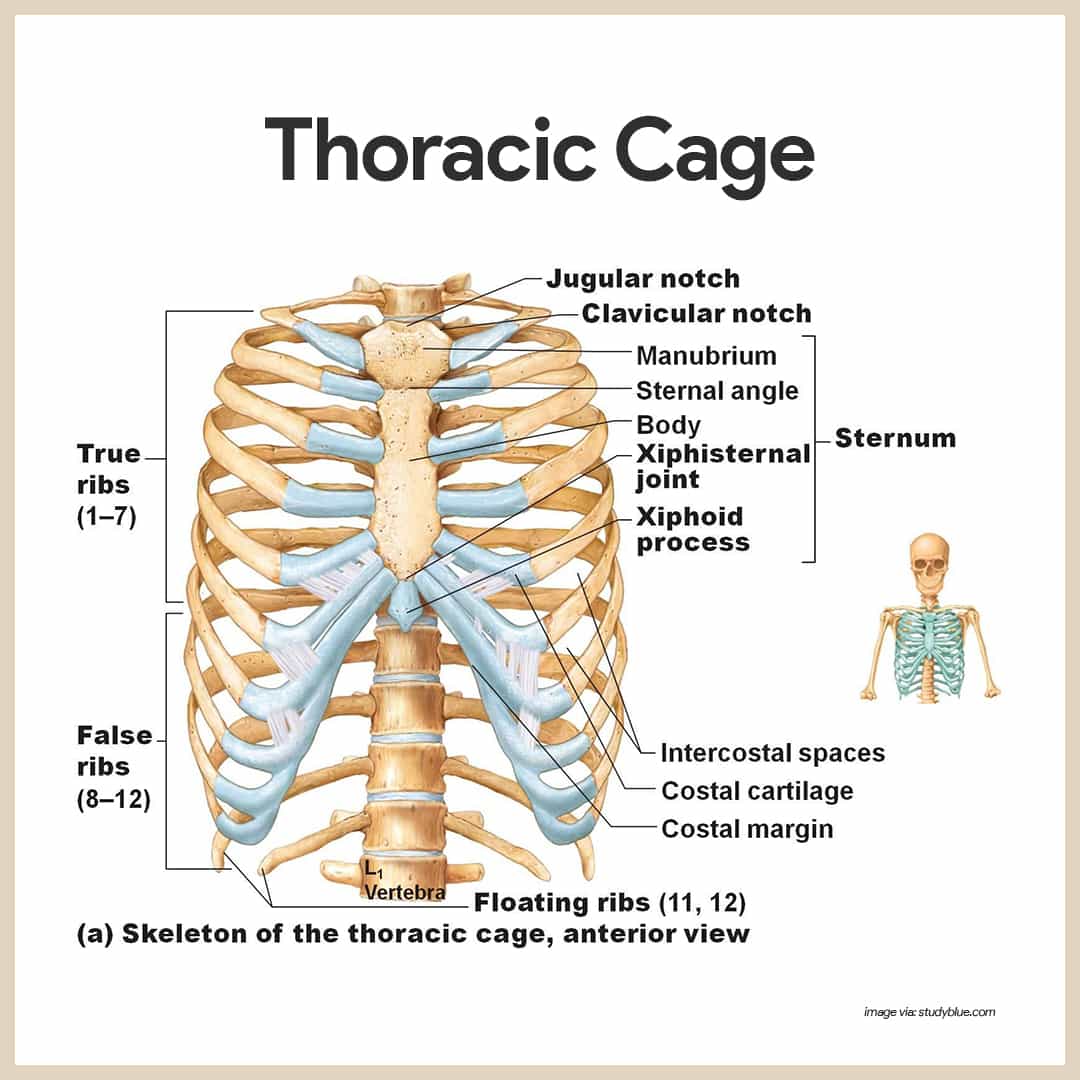 The sternum (breastbone) is a typical flat bone and the result of the fusion of three bones- the manubrium, body, and xiphoid process.

Twelve pairs of ribs form the walls of the bony thorax.

The appendicular skeleton is composed of 126 bones of the limbs and the pectoral and pelvic girdles, which attach the limbs to the axial skeleton.

Bones of the Shoulder Girdle

Each shoulder girdle, or pectoral girdle, consists of two bones – a clavicle and a scapula. 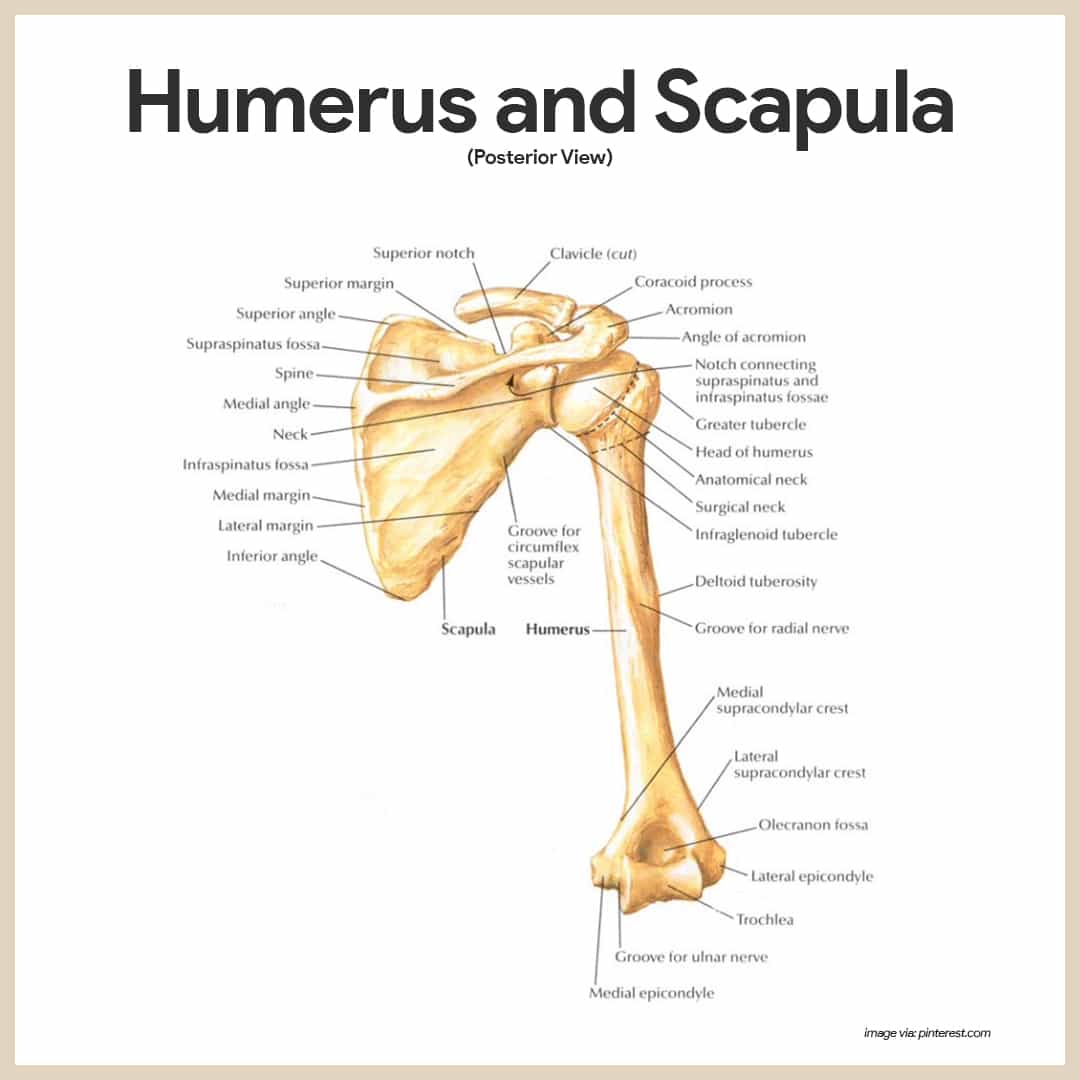 Bones of the Upper Limb

Thirty separate bones form the skeletal framework of each upper limb; they form the foundations of the arm, forearm, and hand. 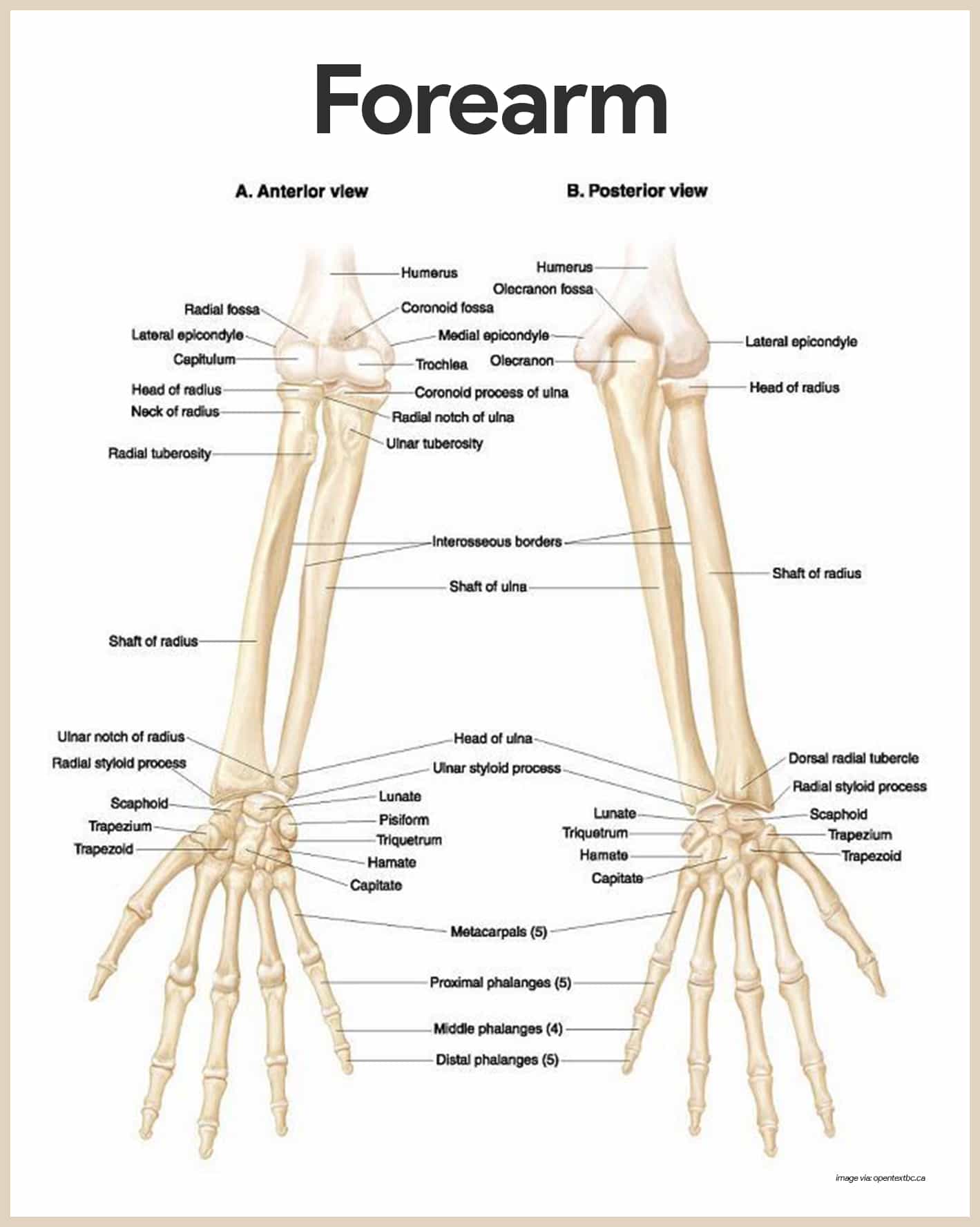 The arm is formed by a single bone, the humerus, which is a typical long bone.

Two bones, the radius, and the ulna, form the skeleton of the forearm.

The skeleton of the hand consists of carpals, the metacarpals, and the phalanges.

Bones of the Pelvic Girdle

Bones of the Lower Limbs

The lower limbs carry the total body weight when we are erect; hence, it is not surprising that the bones forming the three segments of the lower limbs (thigh, leg, and foot) are much thicker and stronger than the comparable bones of the upper limb. 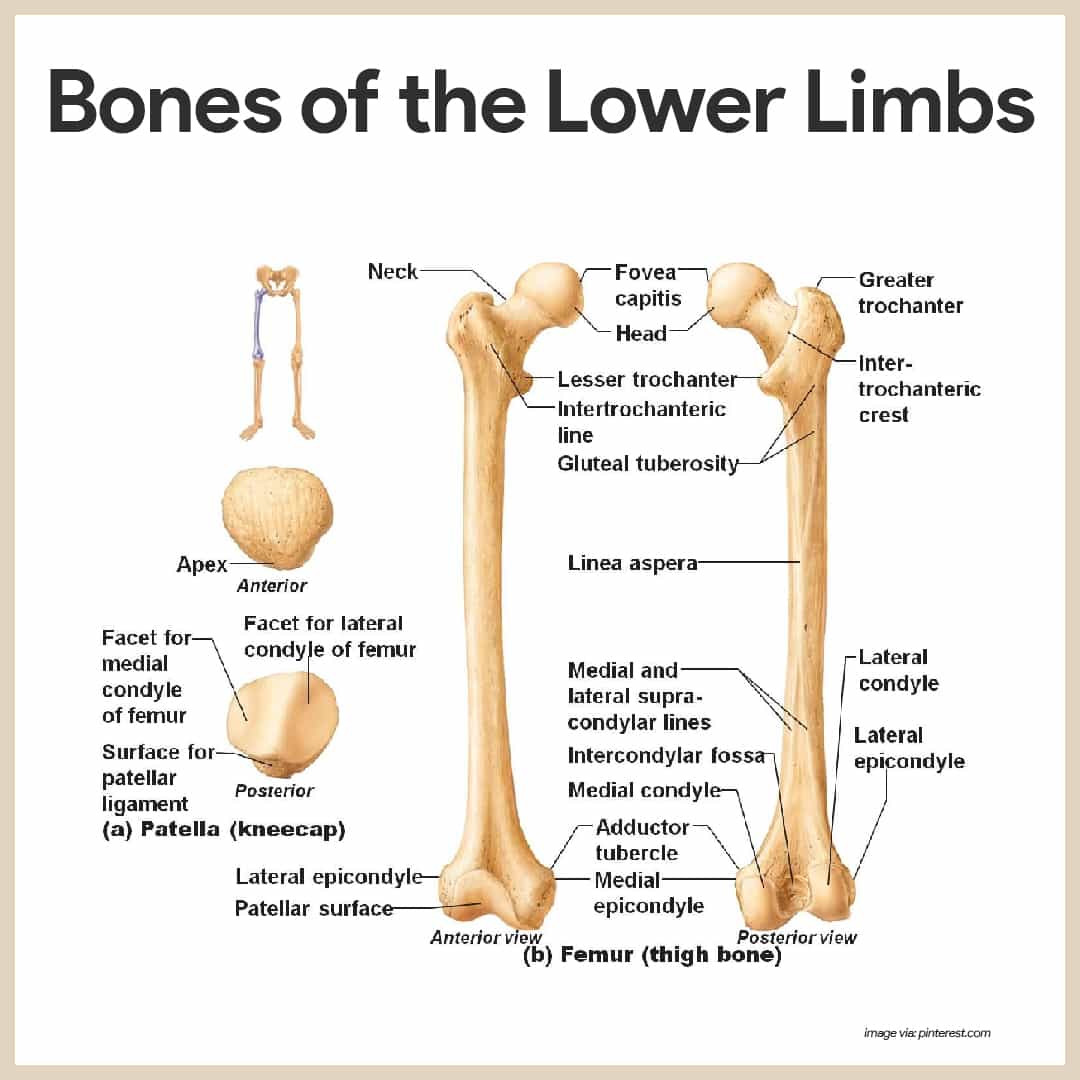 The femur, or thigh bone, is the only bone in the thigh; it is the heaviest, strongest bone in the body.

Connected along their length by an interosseous membrane, two bones, the tibia and fibula, form the skeleton of the leg.

The foot, composed of the tarsals, metatarsals, and phalanges, has two important functions.; it supports our body weight and serves as a lever that allows us to propel our bodies forward when we walk and run.

Joints, also called articulations, have two functions: they hold the bones together securely, but also give the rigid skeleton mobility.

In fibrous joints, the bones are united by fibrous tissue.

In cartilaginous joints, the bone ends are connected by cartilage.

Synovial joints are joints in which the articulating bone ends are separated by a joint cavity containing a synovial fluid; they account for all joints of the limbs. 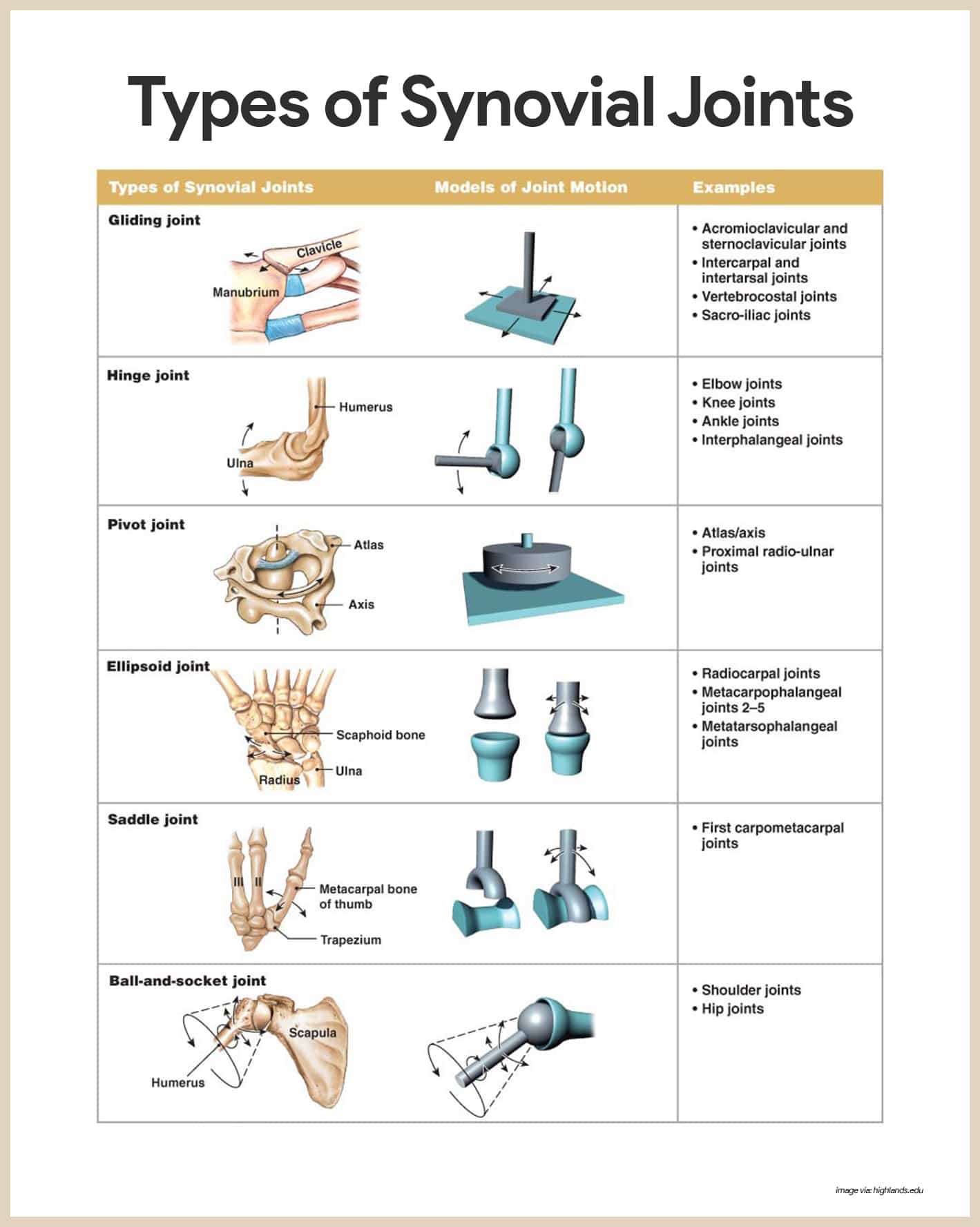 Types of Synovial Joints Based on Shape

The shapes of the articulating bone surfaces determine what movements are allowed at a joint; based on such shapes, our synovial joints can be classified as plane, hinge, pivot, condyloid, saddle, and ball-and-socket joints.

1. Which of the following is NOT considered a function of the skeletal system?

D: This is a function of the integumentary system. The system synthesizes vitamin D3 which converts to calcitriol, for normal metabolism of calcium.
A: Bone is the major supporting tissue of the body and protects internal organs (e.g., ribcage protects the heart, lungs, and other internal organs).
B: Some minerals in the blood are taken into bone and stored. The principal minerals stored are calcium and phosphorus.
C: Many bones contain cavities filled with bone marrow that gives rise to blood cells.

2. Most of the mineral in bone is in the form of calcium phosphate crystals called _________

3. The following statements are true regarding red bone marrow, except.

A. Red marrow is the only site of blood formation in adults.
B. Adults have more red marrow than children.
C. In adults, it is found in the cancellous bone spaces found in flat bones.
D. In children, it is located in the medullary cavity of the long bones.

3. Answer: B. Adults have more red marrow than children.

4. Most of the bones of the upper and lower limbs are long bones; while, the sacrum and facial bones are categorized as ________.

5. Arrange the following sequence of processes that occur during bone elongation within the epiphyseal plate.

6. Which type of fracture where the bone bends and partially breaks?

7. The joint between the metatarsal and carpal (trapezium) of the thumb is an example of

9. This occurs when osteoblast begin to form bone in connective tissue membranes

10. Frank is a 7-year-old boy who arrived at the emergency department with a history of numerous broken bones. The nurse observed that the client is short for his age, has abnormally curved vertebral column and his limbs are short and bowed. The client is most likely suffering from: