Nursing has come a very, very long way in the past century. However, some of the challenges highlighted by nurse leaders in the late 1800’s to early 1900’s, still face the profession a century later even though their exact nature might be somewhat different. Throughout the history of nursing, most of the challenges can be linked to the gender and class barriers faced by women in society and the ever-present economic demands of the healthcare industry.

The shortage of nurses is a global issue discussed on an almost daily basis in reports from across the world, but this is not a new problem. Throughout the past century the recruitment and retention of nurses have not kept up with the ever-increasing demands placed on health care; the growing need for specialized services; as well as population growth, including the aging population leading to more patients with chronic diseases. Added to these factors have been the persistent economic challenges in the healthcare industry and the growing number of other career opportunities for women.

“…the shortage of nurses appears to have been a problem from the time when the value of trained nurses in hospitals and the community was recognized.”

Taking a walk through the history of nursing, the shortage of nurses appears to have been a problem from the time when the value of trained nurses in hospitals and the community was recognized. From the mid-1800’s, when scientific developments in Western medicine increasingly led to successful treatment, hospitals changed from places where the sick and destitute were cared for to institutions where the ill were admitted for treatment.

The time was ripe when Florence Nightingale introduced formal training of nurses, and since then, it appears that the demand for qualified nurses increased exponentially. Hospital training schools for nurses mushroomed and students were used as the main workforce. Apprenticeship–type training programs of varying length and quality developed, with actual teaching often taking place in the students’ off duty time, just before examinations, or not at all. The need for students to fill staffing gaps is why hospital and nursing administrators put up strong resistance against nursing education being placed within systems of higher education.

2. Inadequate conditions of service for nurses

Recruitment and retention in the nursing profession have always been linked to nurses’ working conditions – long hours, heavy workloads, low salaries compared to other professions and a lack of recognition of their essential contribution. While fair hours of work have been standardized to a large extent, nurses are increasingly called on to work mandatory overtime due to staff shortages and economic restraints. Nurses across the world are also still struggling for salaries which match their qualifications, skills, and contributions to health services.

As far back as 1922, in her book A Short history of nursing from the earliest times to the present day Lavinia Dock wrote: “The hours of work both in nursing schools and in private nursing are often too long, and many nurses have not yet as full opportunities as they should have for wholesome recreation and self-improvement.” She went on to say: “Graduate nurses in all branches of nursing need to have fair remuneration for their services in order that they may maintain their health and efficiency and provide for the future.”

3. The role of nurses vs. doctors

Today, nurses are mostly recognized as professional practitioners with their unique role within the health care team. However, opposition to regulatory advances such as those for extended roles of nurses and their right to prescribe within the scope of their advanced training still comes mainly from groups within the medical profession. Wherever nurses were campaigning for state registration in the early 1900’s resistance also came primarily from the medical profession.

“Resist any undue interference with nurses’ duties by medical men; the latter seemed in some cases desirous of making nurses machines for carrying out instructions,” commented Lavinia Dock during the Nursing Section of the Congress of Women in England in 1899. Also from her book, she wrote: “While most progressive medical men recognise the newer developments in nursing […] there are others who are somewhat jealous of what they consider the encroachments of nursing on medicine and who insist on going back to the old discarded system of autocratic authority on the one hand and humble subservience on the other.”

4. How and where nurses should be educated

Only over the last few decades has professional nursing education been firmly placed within the system of higher education in most countries in the world. On the basis of solid research, demonstrating the value of highly qualified nurses in reducing patient complications and deaths, government authorities are accepting that courses for professional nurses should be at least four years, preferably at the baccalaureate level. However, there is still some resistance to this development mainly from hospital authorities, and in some countries, there has been a proliferation in training lower categories of nurses. 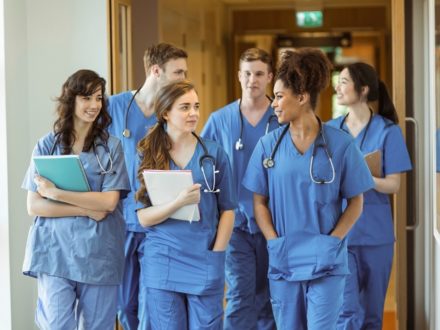 Nurse leaders have advocated for a highly educated nursing workforce starting from the time that formal training for nurses were established. Florence Nightingale believed that nursing education should be separated from service and the nursing school she established was based on this principle. However, as more hospital schools opened and the students became a cheap workforce, the nature and quality of nurse training deteriorated rapidly into a type of apprenticeship training with little attention given to actual education. This pattern became established throughout the world.

The need for higher education for nurses was raised as early as 1893 at the global meeting of nurses at the Chicago World Fair in 1893. The nurse leaders argued for educated nurses rather than the apprentice-type training in hospitals. At the 1899 Congress of Women, Bedford Fenwick strongly opposed training which lasted only two years, “Three years is quite short enough” she said. This visionary leader also suggested that “the practical skill required might, in the future, demand a further extension of training in special branches of nursing.” At this meeting, it was also discussed that the age limit of 23 for entry into nursing was too high, as this shortened the women’s’ career and, after all, women are seen as perfectly able to be mothers at 18.

5. Professional recognition through licensure and registration

The issue of state registration or licensure for nurses has been resolved in most parts of the world although there are still countries where the International Council of Nurses (ICN) are assisting local nursing organizations and governments to establish an effective regulation of the profession. This body also has a formal regulatory network which monitors and advises on nursing management globally. The purpose of registration has always been to protect the public from those who were untrained or had minimal training, as well as to provide nurses who had proper formal training with a form of recognition.

State registration was also one of the main topics of discussion at the 1899 Congress. In her paper on “The professional training and status of nurses,” Mrs. Neill from New Zealand stressed the need for a final examination by a Central Board after three years training with the certificate being registered on their books. “The value of the hospital certificate is now very low. Certificates and badges are sometimes given by hospital authorities without any examination … even after a brief hospital residence.” Miss MH Watkins of South Africa presented a paper on how state registration was achieved in South Africa in 1891. In the discussion, it was pointed out that the battle for registration was closely tied to that of voting rights for women, where social barriers to allowing women their own voice had to be overcome.

6. Nursing advocacy in the health of communities

“Nurses – A Voice to Lead” was this year’s ICN theme for nurses’ day. All nurses, wherever they find themselves, were encouraged to take an active role in achieving the United Nations Sustainable Development Goals. Nurses are the largest group of healthcare professionals, serving even in the most remote areas. Because nurses are the health care workers most closely involved with patients, their families, and communities, they have intimate knowledge of the underlying causes of ill-health. Using their voice in activism and innovation they can bring real change to the health of communities.

“Nurses are the largest group of healthcare professionals, serving even in the most remote areas.”

History shows us that this is not a new call on nurses and, though the language used is old-fashioned, the following might as well have been written today. During discussion time at the 1899 Woman’s Congress, Lavinia Dock said the following: “There is a call coming for nurses, who, besides professional ability, shall have such wider enthusiasms and capacities as will fit them to help in the wider world-interests concerned with the preservation of health and happiness.” In her 1922 book, she pointed out that although expert workers were now being trained to deal with the problems of poverty and other social ills “…nurses are still in the truest sense social workers, constantly battling with adverse social conditions and needing all the social knowledge and insight they can find to carry out their own social function of healing broken bodies and fighting disease. We need a whole army of energetic and courageous nurses with the spirit of the old pioneers, but with better preparation than theirs, to open up new fields and to challenge the difficult and complicated problems of our own day.”

Is patriarchy still at the root of our challenges?

Current discussions on the issues in the nursing profession still echo the following written by Lavinia Dock in 1922:

“It is, however, perfectly plain that many of the difficulties which nurses have faced in the past have been due to the fact that most of them were women […] We might apply this to the whole history of nursing and say that the status of nursing in all countries and at all times, has depended, not entirely, but to a very large extent on the status of women and on the degree of freedom which they have enjoyed.”

Help us spread the word!
TwitterFacebookPinterestLinkedInBufferEmailPrintSMSWhatsAppMessenger
Frieda Paton, M.Cur, RN
Frieda Paton is a registered nurse with a Master’s degree in nursing education. Her passion for nursing education, nursing issues and advocacy for the profession were ignited while she worked as an education officer, and later editor, at a national nurses’ association. This passion, together with interest in health and wellness education since her student days, stayed with her throughout her further career as a nurse educator and occupational health nurse. Having reached retirement age, she continues to contribute to the profession as a full-time freelance writer. In the news and feature articles she writes for Nurseslabs, she hopes to inspire nursing students and nurses on the job to reflect on the trends and issues that affect their profession and communities - and play their part in advocacy wherever they find themselves.