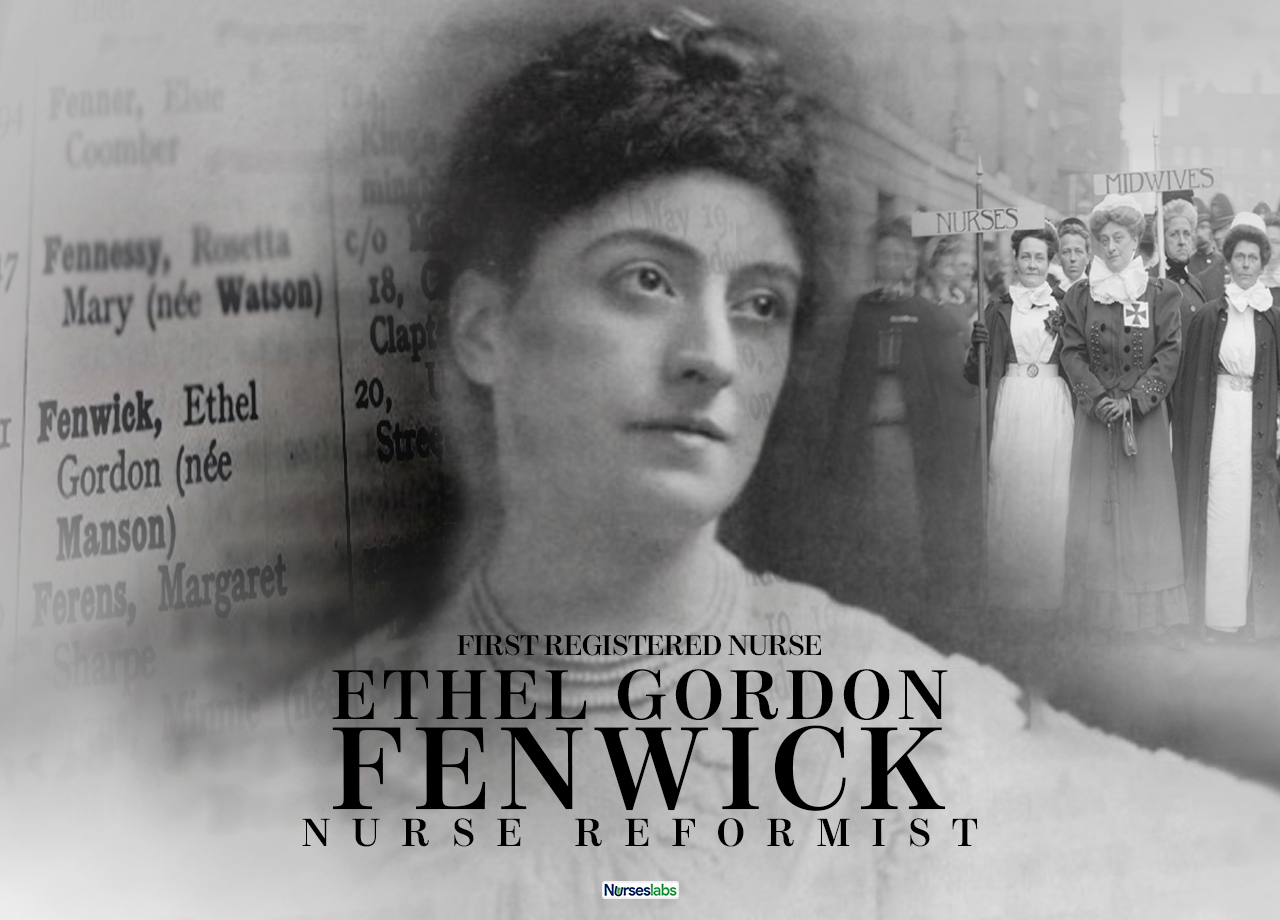 Ethel Gordon Fenwick was the pioneer of the movement for professional registration for nurses. The International Council of Nurses was Fenwick’s brainchild, and she was the principal founding member of the organization. Some suggest that her contributions to the nursing profession might be as significant as those of Florence Nightingale, and yet many nurses have never heard of her.

Fenwick launched her campaign for compulsory registration of nurses in 1887, and this was finally achieved in the United Kingdom in December 1919 after a struggle of 32 years. This was long after nurses across the world had followed her lead and achieved professional registration in their own countries.

This year is the centenary of the passing of the Nursing Act in the UK and is, therefore, an excellent time to have a look at and acknowledge Ethel Gordon Fenwick’s contribution to nursing worldwide.

Ethel Gordon Manson was born in 1957 in Scotland to a wealthy family, her father being a prominent medical practitioner. Her father passed away when she was still a toddler, after which her mother remarried, and the family moved to Yorkshire. Her stepfather was a member of parliament, and it was probably under his influence that she developed her political consciousness and skills.

As was the case with many daughters of wealthy families at that time, she was educated privately. As a young woman, Fenwick was described as beautiful and already showed the characteristics of a leader – she was well educated, highly intelligent, spirited, and strong-willed. She was a dedicated supporter of the suffragist movement – the campaign to obtain voting rights for women.

As with the case of Florence Nightingale, it can be presumed that Fenwick entered nursing because it was one very few acceptable options women of high social standing who wanted a career and independence.

From Lady Probationer to Matron

Ethel Gordon Fenwick completed her nurse training as a paying probationer nurse at the Children’s Hospital in Nottingham and later at the Manchester Royal Infirmary. After qualifying, she moved to London and worked as a sister in Whitechapel and Richmond, but her ambition was to become a matron at a training school.

In 1881, when she was only 24 years old, she applied for and was appointed to the position of matron at St. Bartholomew’s Hospital in London.

Under her leadership, the St Bartholomew’s Nurse Training School became one of the best in the country. It was vital for her to raise nursing standards. She made sure that students received theoretical instruction in addition to working in the wards and increased the length of training from two to three years.

Fenwick was convinced that nurses were professionals in their own right. Only adequately trained women should be able to call themselves nurses, and nurses should not be exploited by hospital administrators and medical practitioners. As matron, she managed to reduce the hours of work and convinced the administrators to provide for paid holidays and an adequate diet. She even did an epidemiological study on the illnesses and infections among nursing staff.

After six years as matron, Ethel Gordon Manson resigned her position to marry Dr. Bedford Fenwick in 1887– in those years, women of her standing could not marry and continue with their careers. In that same year, she started her public campaign for compulsory registration of nurses – with the full support of her husband.

Statutory registration for medical practitioners came into law in the United Kingdom in 1858. Discussions about registration of nurses started in the early 1880s on the platform of the Hospital Association. However, this organization believed that one year of training should be enough for registration as a nurse.

Because of disagreement on this point, Fenwick and a group of matrons broke away from the Hospital Association and founded the British Nurses Association in 1887. The organization was granted its Royal Charter in 1893 and became known as the Royal British Nurses Association (RBNA) with Princess Christian as the President. Interesting to note is that a large number of medical practitioners were also members of this organization. The goal of the RNBA was to unite nurses as members of a recognized profession and to mandate registration as evidence of proper training. However, even within the RBNA, there was disagreement. Fenwick sets the bar too high, believing that the requirements for women who want to enter nursing were too rigorous.

In 1894, Fenwick resigned from the RBNA and founded another avenue, the Matron’s Council of Great Britain and Ireland, to continue her fight for the cause of professional registration for nurses.

The first Bill for registration of nurses was introduced to the British parliament in 1903. It was defeated after strong opposition from doctors, hospital administrators, and also some nurses – not the least of which was Florence Nightingale.

After two further attempts to have the Bill passed, and the interruption created by World War I, the Nurses Registration Act in the UK was finally approved on 23 December 1919. From the public gallery, Fenwick watched the fulfillment of her life’s ambition at the age of 62. Later her name was the first one entered on the nursing register in the UK, and she became Registered Nurse No. 1 (image below) in that country.

The struggle for state registration in the UK was a long one. In the meantime, other nurse leaders across the world, influenced by Fenwick’s views and the campaign in the UK, had taken up the cause in their own countries.

Ethel Gordon Fenwick acquired the Nursing Record in 1892, which became the British Journal of Nursing (BJN) in 1902. She was the editor right from the start until her just before her death – a period of 53 years.

It was a journal for nurses, owned and written by nurses, and edited by a trained nurse. The content included educational articles as well as news about the world of nursing. Fenwick used the Journal to promote the issues that were important to her.

She used it as a mouthpiece for the campaign for nurse registration, the need to raise the standards of nursing education, and to expose the unfair treatment of nurses. She also often wrote editorials in support of the women’s suffrage movement.

Fenwick was a keen writer and became an acclaimed journalist, serving as the President of the Society of Women Journalists from 1910-1911. “She was also, on occasion, devastatingly critical and shrewd, and she wrote fearlessly to expose injustices which were inflicted on the Nursing Profession,” according to an article in the BJN shortly after Fenwick’s death. “She wrote as she thought and spoke, with rapier-thrust directness and with utter conviction.”

Founder of the International Council of Nurses

In 1893, Ethel Gordon Fenwick represented the RBNA at the Congress of Representative Women at the World’s Fair in Chicago where her idea of founding the International Council of Nurses was sparked.

When prominent nurses from across the world were attending the International Congress of Women in London in 1899, they were invited to join the Annual General Meeting of the Matron’s Council of Great Britain. During this meeting, Fenwick presented her plan for an international nursing organization. The proposal was accepted unanimously, and a committee to get the organization off the ground was elected right away.

The first constitution of the ICN was adopted in 1901, and Fenwick was elected as the first president. Lavinia Dock, a prominent nurse leader in the USA, was chosen as the Secretary. The first ICN Congress was held in Berlin in 1904, but at that stage, only Great Britain, the USA, and Germany had nursing organizations that could affiliate with the ICN.

“She recognized the benefits a worldwide network would have for women, but she also saw the potential for an international organization of nurses to strengthen the profession and make its voice heard across the globe,” Howard Catton, current CEO of the ICN, wrote about Fenwick. “As a woman of action, she took her vision out into the world and encouraged newly formed national nursing organizations to join together in the International Council of Nurses (ICN).”

Throughout the rest of her life, Ethel Gordon Fenwick continued to campaign for the advancement of the nursing profession, advocating for higher standards of nursing education and encouraging nurses to improve themselves through further education.

At the ICN Congress in 1912, Fenwick proposed what was later to become the Florence Nightingale International Foundation (FNIF). Through Florence Nightingale National Committees, administered by nursing associations in membership with the ICN, educational scholarships are still provided for post-graduate study by nurses and midwives.

In 1926, Fenwick founded the College for Nurses – today, the Royal College of Nursing. Only registered nurses could join the organization, and only nurses could serve on the Board and committees. It provided all the usual benefits of a professional nursing organization for its members.

Fenwick was the first President of the College for Nurses and held this office until her death in 1947. She passed away at the age of 90 after she never fully recovered from a fractured femur the year before.

Through her thought leadership, Ethel Gordon Fenwick had a tremendous influence on the development of nursing, not only in the UK but also in the British Colonies, the USA and many other parts of the world.

Throughout her career, Fenwick stood firm on her beliefs – a quality which was necessary to achieve her objective of developing nursing as a recognized, independent profession in a male-dominated world.

She has been described as colorful, ambitious, confrontational, and argumentative. This might be the reason why “Ethel Gordon Fenwick is not as well known or famous as she should be, but our profession owes her a debt of gratitude” in the words of Howard Catton.