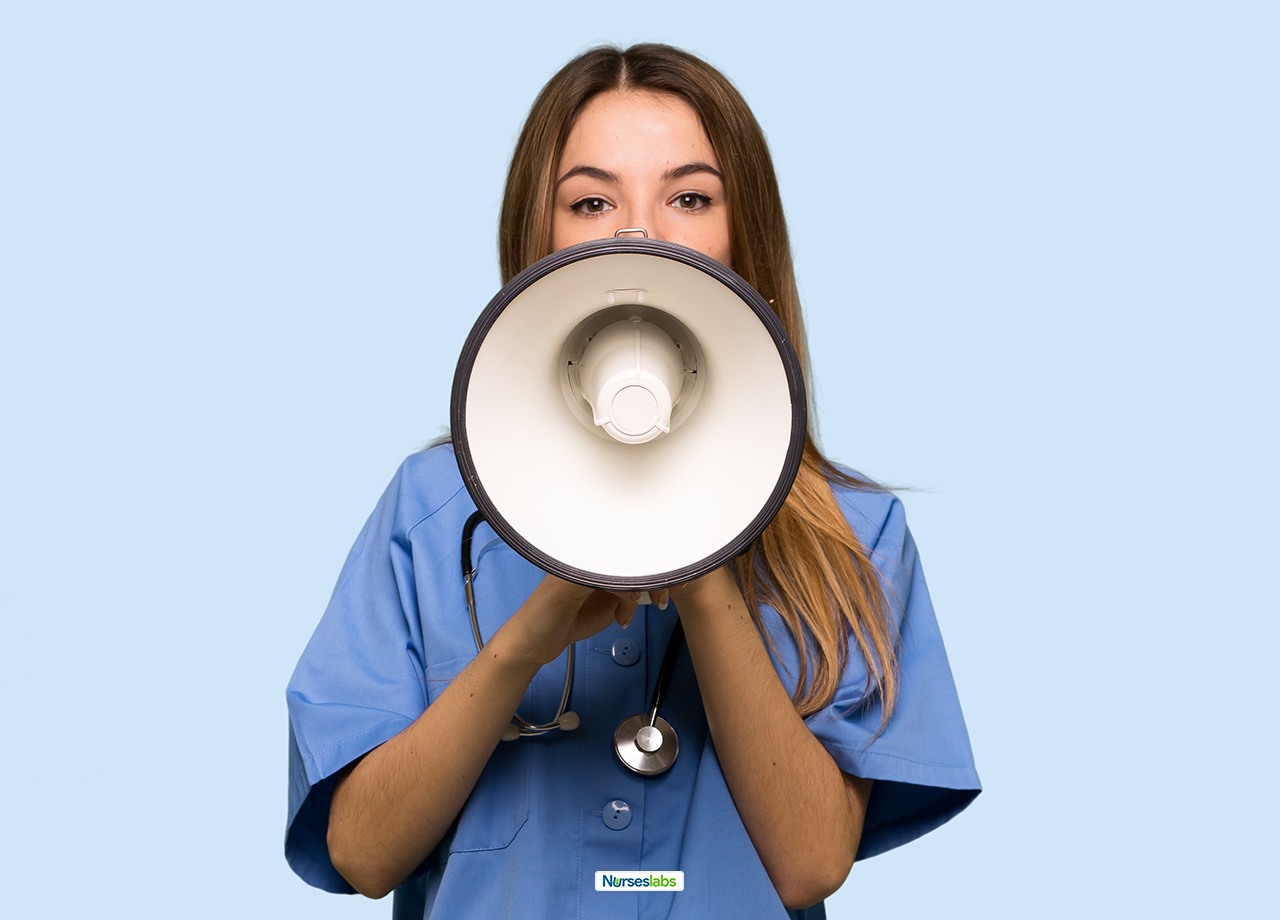 Looking back since Nurses’ Day 2018 we have a reason this 2019 to celebrate that nurses seem to have found their voice in advocating for their profession and their patients. Never before has there been as much worldwide public attention, recognition, and support for the nursing profession and its indispensable role in society.

A year ago during Nurses Week, the findings of “The Woodhull Study Revisited: Nurses’ Representation in Health News Media” were presented to the US National Press club. The original study was done two decades ago and found that nursing was nearly invisible in the media. The conclusion of the revisited study was that nothing had changed – no one is talking about nurses, the work we do or listening to what we have to say.

Things certainly seem to have changed since then.  “The global spotlight currently shining on the nursing profession offers a once-in-a-lifetime opportunity to address some of the key issues threatening its future,” said Howard Catton, Chief Executive of the International Council of Nurses (ICN) in an interview with Nursing Times.

Let’s have a look at some of the highlights, nurse advocacy groups and campaigns to which you can support and add your voice.

The World Health Organisation (WHO) announced during January that the Executive Board had designated 2020 as “Year of the Nurse and Midwife”. The year 2020 is also the 200th anniversary of Florence Nightingale – one of the greatest ever leaders in nursing.

We are holding our breath this month when the proposal has to be officially accepted by governments during the World Health Assembly. If it succeeds make sure that you contribute to focusing attention on nurses and what they do during 2020 – even if it’s only through your local media.

One of the ways you can be part of raising the status of nursing is to join the Nursing Now movement which, together with the ICN, lobbied for the “Year of the Nurse and Midwife.”

The 3-year, global Nursing Now Campaign was launched in 2018 and its aim is “to improve perceptions of nurses, enhance their influence and maximize their contributions to ensure that everyone everywhere has access to health and healthcare.”

The UK Burdett Trust for Nursing is running the campaign with the full collaboration of the International Council of Nurses (ICN) and the WHO. Besides the involvement of nurses, the campaign also uses the support of prominent public figures and policymakers to help get their message across.

The campaign has a number of global goals but depends on national, regional and local groups to make the changes happen in their own countries. There are already over 200 groups with activities in over 80 countries, with more being launched every month. You can sign up to join the global Nursing Now campaign here.

Across the world, nurses have also made their voices heard and achieved solid results through various movements and petitions during the past year. Most followed on a post or petition by an individual nurse going viral on social media – and then grabbing the attention of the public and the press.

The most recent example, which received unprecedented press coverage, was the outcry after Sen. Walsh’s foot-in-mouth comments.

A campaign, initiated by the American Nurses Association (ANA), for 4 million registered nurses to increase their personal wellness and improving their health in five areas: physical activity, nutrition, rest, quality of life, and safety.

Nurses are less healthy than the average American. Research shows that nurses are more likely to be overweight, have higher levels of stress, and get less sleep. As the largest and most trusted health care profession, nurses are critical to the health of the nation. Healthy nurses are great role models for their patients, colleagues, families, and neighbors. Feeling challenged? You can join here.

Never before have so many nurses across the US come together with one voice to express their outrage than after Washington State Sen. Walsh commented that nurses in smaller hospitals probably spend most of the day playing cards. The result of the outcry was that the bill related to nurses’ shifts and breaks was accepted without the amendments proposed by the Senate.

A petition started by registered nurse Juliana Bindas was signed by 830,000 nurses from across the world in about two weeks. The petition will be handed over when it reaches one million signatures. You can still use your voice for nurses and nursing by signing the petition here. Get updates on nursing advocacies that you can join in the Washington State area by joining Washington State Nurses Association (WSNA) and NursesTakeDC.

5. Show Me Your Stethoscope

Another nurse advocacy movement that has grown from strength to strength is Show Me Your Stethoscope (SMYS) – a group started after nurses were mocked on a public platform for wearing “doctor’s stethoscopes”.

SMYS is an online movement with 650,000 members to date. The movement is run by nurses who believe that the millions of nurses have the collective power to create the changes needed in the profession and in health care. They provide advocacy and support for nurses, in different ways than traditional unions, with the motto “Nurses take care of patient’s, we take care of nurses”.  SMYS have held rallies and other events provided scholarships and assisted nurses in need.

Most recently SMYS supported Radonda Vaught who had been criminally charged for reckless homicide after a medication error caused a patient’s’ death. They started a “Go Fund Me” account to help pay for Vaught’s legal costs and also turned up to support her during her first court appearance. You can join SMYS here.

Meanwhile in New Zealand nurses achieved a better deal through another movement started through social media.

When nurses in New Zealand were dissatisfied with the way salary and staffing negotiations were going two nurses launched a Facebook page under the pseudonym Florence Smith and with the hashtag #Hear our voices. This eventually spread to the extent that thousands of nurses joined in country-wide marches on Nurses’ Day last year, under the Nurse Florence banner. A petition was handed over to parliament as well.

Largely due to the exchange of opinions expressed on the Nurse Florence page nurses rejected further pay offers and, in July last year, nurses in New Zealand went on strike for the first time in 30 years. Further strike action was averted by an improved pay offer by the government and an undertaking to give attention to improved staffing.

The NYSNA have successfully reached a tentative agreement with several hospital systems in New York after posting an intent to strike on March of this year. The agreement includes staffing ratio for the initial hiring of 1,500 new nurses and an additional $100 million dollars to hire more nurses.

A partylist movement in the Philippines to empower and represent nurses in the country. They have been advocating for an increase in the salary of Filipino nurses and better working conditions for them. ANG NARS Partylist have been fighting for a better nursing law in the Philippines

9. Men into Nursing Together (MINT)

A group of nursing students and lecturers in the UK launched a unique project to attract more men into the profession. Men into Nursing Together (MINT) was started at Sheffield Hallam University (SHU) and the group uses mainly social media to get its message across.

The Irish Nurses and Midwives Organisation (INMO) has called on the public, nurses and midwives to support their cause of addressing the shortage of nursing staff in hospitals. The group argues that low pay combined with shortages is causing nurses to leave the profession or emigrate. You can support their cause by signing the the Stand With Us public petition.

Be a voice to lead!

As a nurse, you are valuable and making a difference with your unique knowledge and skills. You also know that you could do more if the nursing shortages, nurse-patient ratios, and the many other issues in nursing were resolved.

The ICN theme for International Nurses Day is “Nurses: A Voice to Lead Health for All.”  There are over 20 million nurses in the world representing over 50% of the healthcare workforce.  Surely with these numbers, we have a powerful voice.

Use your voice. Become part of advocacy for the profession and for your patients by taking part in campaigns. Join nursing and community organizations. Develop your leadership and negotiation skills by accepting roles on committees – whether at your place of work, in organizations or on policy-making bodies at local, regional and national levels.

“ICN believes that the time is ripe for nurses to assert their leadership,” said Annette Kennedy, President of the ICN, in her message for International Nurses Day. “As the largest health profession across the world, working in all areas where health care is provided, nursing has vast potential and value if appropriately harnessed to finally achieve the vision of Health for All.”

For further inspiration have a look at the ICN resource and evidence toolkit for International Nurses Day.