Only a few weeks to go and the family would have a new member that would light up everyone’s faces with a smile. As the big day is approaching, the family must also be aware of the dangers that might still claw away their little one from having her first glimpse of the world. 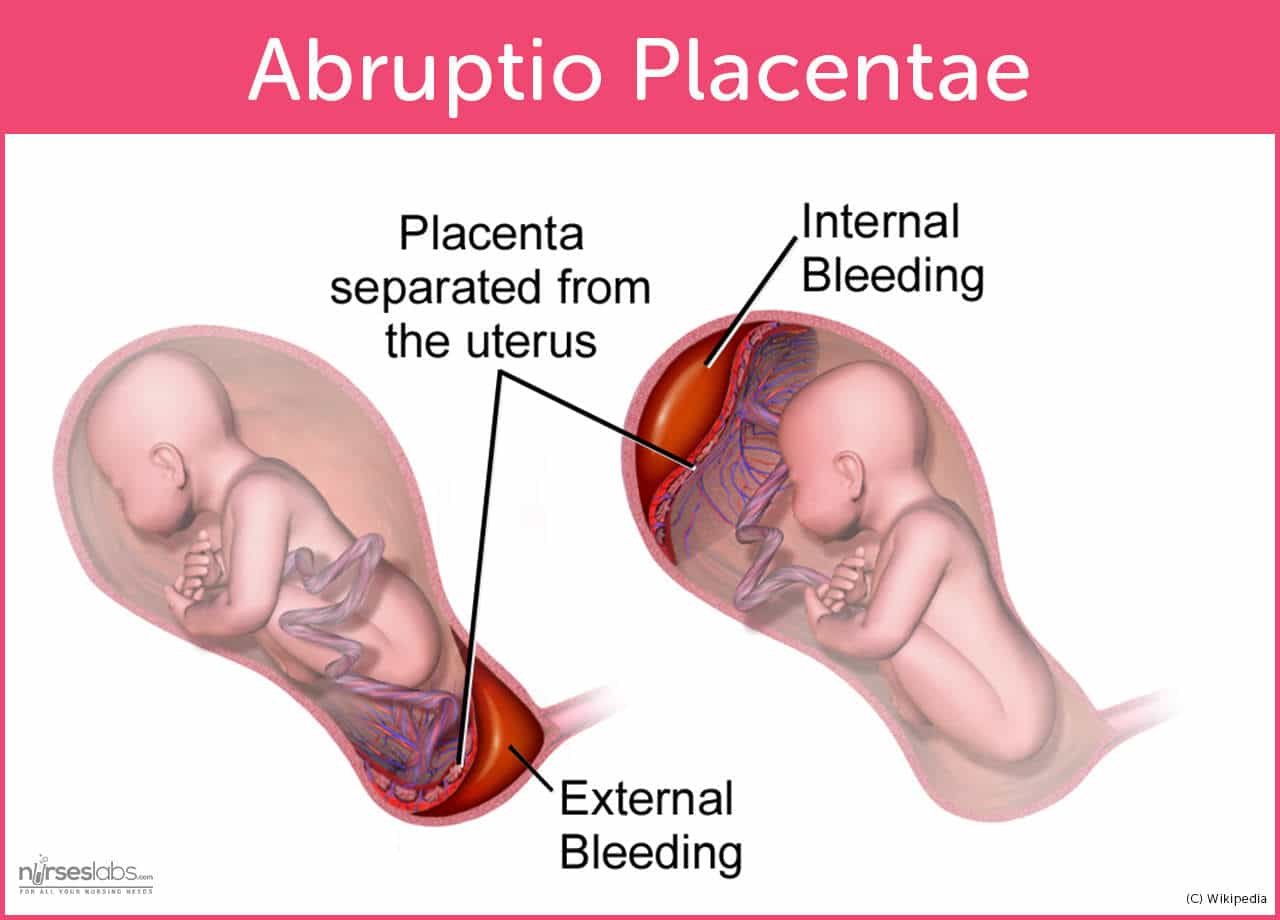 The following are the risk factors that surround abruption placenta and these should be made known to all pregnant mothers to avoid development of this fatal condition.

The types of abruption placenta are measured according to the degree of placental separation that has occurred.

The signs and symptoms of abruption placenta must be monitored and detected early before it progresses to a critical stage.

These diagnostic procedures would be enforced by the physician to finally diagnose the presence of abruption placenta.

To avoid a worsening condition, these medical procedures are implemented for both the mother and the fetus.

Once the condition has reached a stage that mightily endangers the life of both patients, then surgical management is put into action.

A vital role is also upheld by the nurses during this situation. Their accurate assessment would be one of the baseline data for all health care providers to plot the care plan for the patient.

Just how much you’ve learned from our study guide about abruptio placentae? Take our 5-item quiz below and find out!

2. A pregnant woman arrives at the emergency department (ED) with abruptio placentae at 34 weeks’ gestation. She’s at risk for which of the following blood dyscrasias?

A. Swelling of the calf in one leg
B. Prolonged clotting times
C. Decreased platelet count
D. Petechiae, oozing from injection sites, and hematuria

4. A nurse is assessing a pregnant client in the 2nd trimester of pregnancy who was admitted to the maternity unit with a suspected diagnosis of abruptio placentae. Which of the following assessment findings would the nurse expect to note if this condition is present?

5. An ultrasound is performed on a client at term gestation that is experiencing moderate vaginal bleeding. The results of the ultrasound indicate that an abruptio placentae is present. Based on these findings, the nurse would prepare the client for:

A. Complete bed rest for the remainder of the pregnancy
B. Delivery of the fetus
C. Strict monitoring of intake and output
D. The need for weekly monitoring of coagulation studies until the time of delivery

The major maternal adverse reactions from cocaine use in pregnancy include spontaneous abortion first, not third, trimester abortion and abruptio placentae.

Abruptio placentae is a cause of DIC because it activates the clotting cascade after hemorrhage.

Option A: Thrombocytopenia results from decreased production of platelets.
Option B: ITP doesn’t have a definitive cause.
Option D: A patient with abruptio placentae wouldn’t get heparin and, as a result, wouldn’t be at risk for HATT.

DIC is a state of diffuse clotting in which clotting factors are consumed, leading to widespread bleeding. Platelets are decreased because they are consumed by the process; coagulation studies show no clot formation (and are thus normal to prolonged); and fibrin plugs may clog the microvasculature diffusely, rather than in an isolated area. The presence of petechiae, oozing from injection sites, and hematuria are signs associated with DIC. Swelling and pain in the calf of one leg are more likely to be associated with thrombophlebitis.

In abruptio placentae, acute abdominal pain is present. Uterine tenderness and pain accompany placental abruption, especially with a central abruption and trapped blood behind the placenta. The abdomen will feel hard and board-like on palpation as the blood penetrates the myometrium and causes uterine irritability. Observation of the fetal monitoring often reveals increased uterine resting tone, caused by the failure of the uterus to relax in an attempt to constrict blood vessels and control bleeding.

The goal of management in abruptio placentae is to control the hemorrhage and deliver the fetus as soon as possible. Delivery is the treatment of choice if the fetus is at term gestation or if the bleeding is moderate to severe and the mother or fetus is in jeopardy.

The team of health care providers could very well be the key towards the survival and safety of both the mother and the fetus. The role of the support system is also essential for this situation. Finally, the willpower of the mother to survive with both of their lives intact could be the turning point for those who care deeply for the patient and the child.